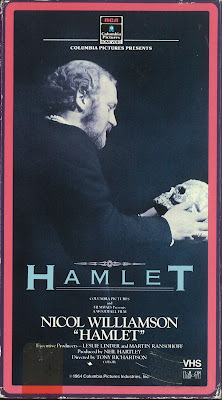 Hamlet. Dir. Tony Richardson. Perf. Nicol Williamson, Judy Parfitt, Anthony Hopkins, Marianne Faithfull, and Mark Dignam. 1969. DVD. SPE, 2012.
A few people have told me that their very favorite film version of Hamlet was Nicol Williamson's. I know him primarily from the BBC Macbeth (for which, q.v.), but I've heard that his 1969 stage version of Hamlet rivaled Gielgud's, Barrymore's, and Burton's.  I've also heard that he was rather difficult to deal with when he was in the New York production of I Hate Hamlet (for the play, but not that particular production, q.v.; for that particular production, cf. this article from the New Yorker).

Intrigued by the number of people who count this version as their favorite (and usually count it there by a large margin), I watched it.

I'm not sure I see the brilliant acting that others see.

The production is good, but I just don't see where it rises even to the top of the vengeance of Hamlet films that are out there—much less far above others.

The film has some interesting points—notably how much of it is filmed in bed. Some of John and Yoko's late-'60s influence may be there, but there's also some intentionally.  I was struck by the sequence from Polonius' reporting and reading of Hamlet's letters through "To be or not to be" and on to the nunnery scene. Gertrude and Claudius (played by Antony Hopkins) receive Polonius' news in bed; Hamlet delivers the soliloquy in bed; he affronts Ophelia in a kind of hammock.

Two clips will serve as examples here. The first shows Polonius reporting his news. Hopkins delivers his lines well—but without ever pausing before their delivery. As a consequence, the scene seems rushed and Claudius seems (giving the intention of the actor and director the benefit of the doubt) to give very little consideration to anything. Without the benefit of the doubt, it seems like students reading through the text in class--just trying to get through it:

The second clip gives us the nunnery scene. Some interesting camera work toward the end is worth noting, and the performance itself is fine, but I don't see the insanely good Hamlet others rave about:


What are your thoughts? Give me a defense of Williamson in the comments and I'll reconsider!
Links: The Film at IMDB.