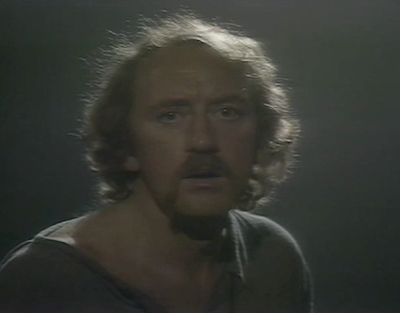 Macbeth. Dir. Jack Gold. Perf. Nicol Williamson and Jane Lapotaire. 1983. DVD. Ambrose, 2001.
Two more direct versions of Macbeth (the next less direct than this) need to be addressed before we can move on to additional derivative versions. The first is the BBC's relatively conservative production.

The BBC's Complete Shakespeare gets mocked fairly often in Shakespeare and film circles—and some productions deserve that mockery. One has only to think of John Cleese—otherwise brilliant—as Petruchio to understand that. However, this production is less deserving of mockery than others. For one thing, its Lady Macbeth is really stunning—particularly in the "Come, you spirits" speech.

Their Macbeth is also interesting. In this dagger speech, we once again have an absent dagger—but, this time, Macbeth sees what isn't there by looking directly as us! Brrrr! Chilling. This Macbeth also seems eager to clutch the dagger, rather than scared (as in other productions). And there's more to say, but I'm dashing off. Enjoy!