Banquo's Chair: A Play in One Act

Croft-Cooke, Rupert. Banquo's Chair: A Play in One Act. London: H.F.W. Deane & Sons, 1930.
You may recall the episode of Alfred Hitchcock Presents that dealt—not altogether obliquely—with Banquo's ghost (for which, q.v.).

With the help of an excellent librarian, I was able to track down the source material. It turned out to be a one-act play with the same title. The story is roughly the same, including the same cleverly twisting ending—but the ending works itself out slightly differently in the play.

I'm attaching images (click on them to enlarge them) of the last four pages of the play so that you can see the difference for yourself. And if you happen to direct any amateur dramatic societies, you might consider putting on this play—I think it is quite likely to please an audience! 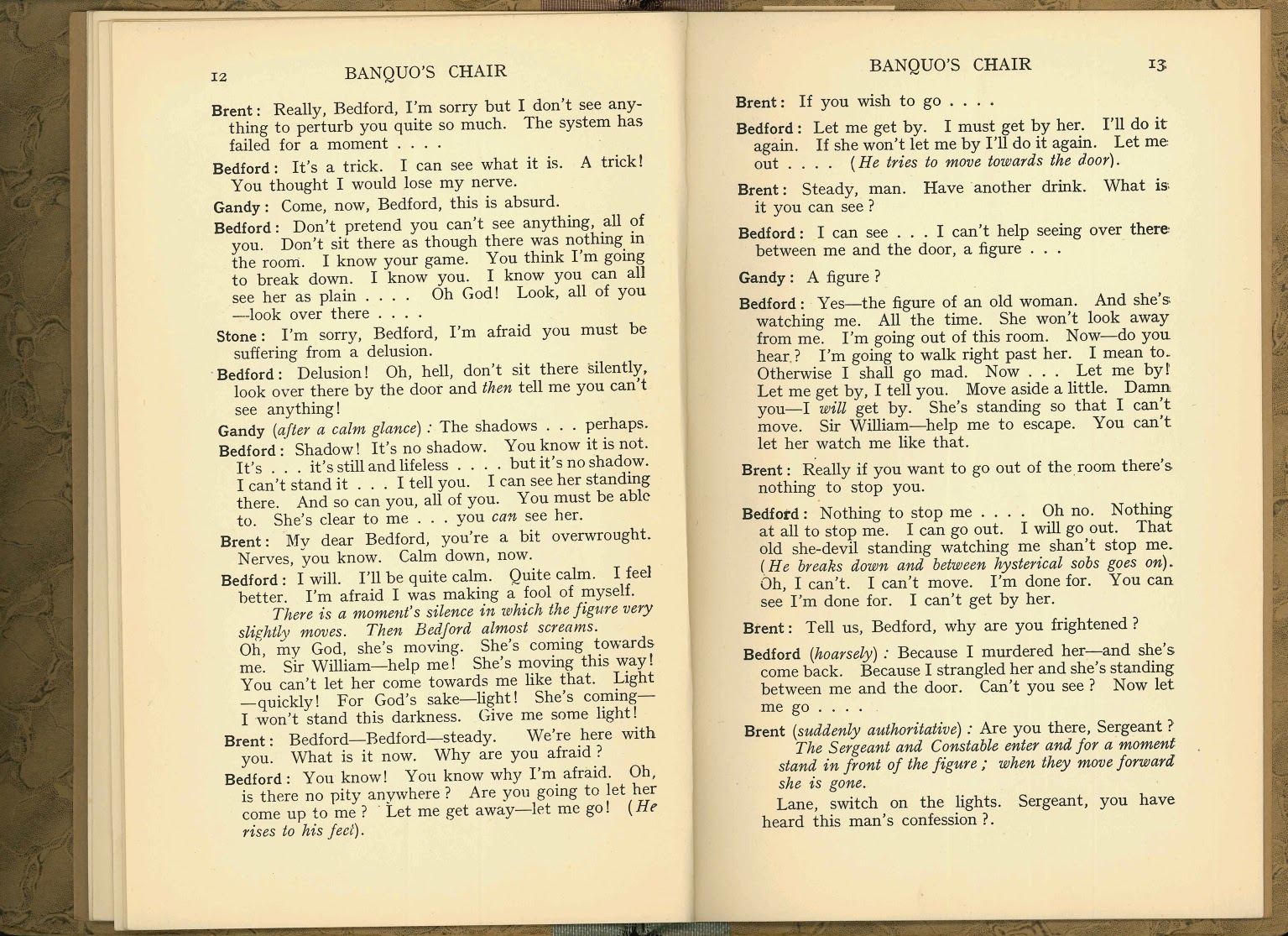 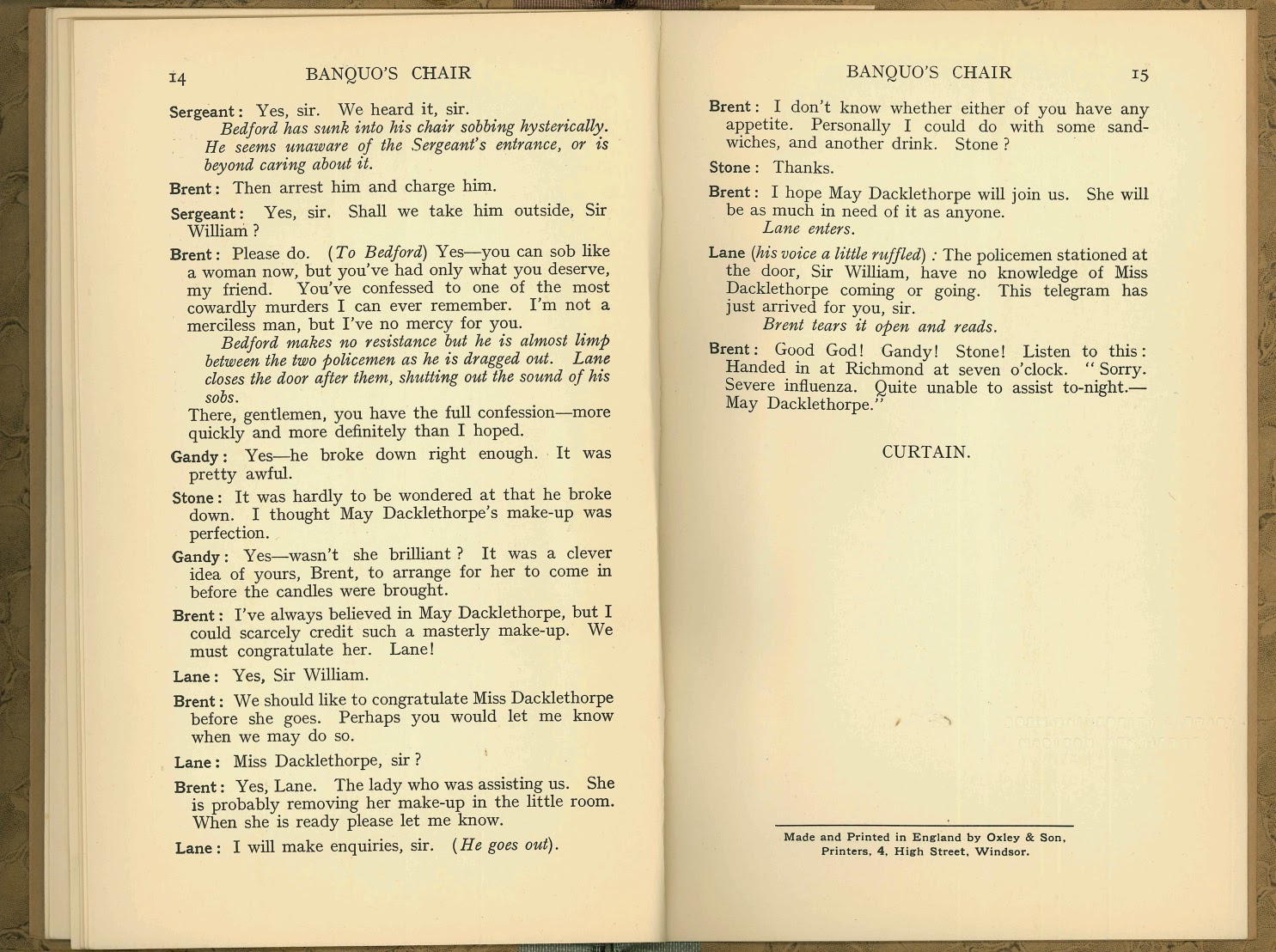 More Shakespearean Monkeys—Baboons, to be Precise 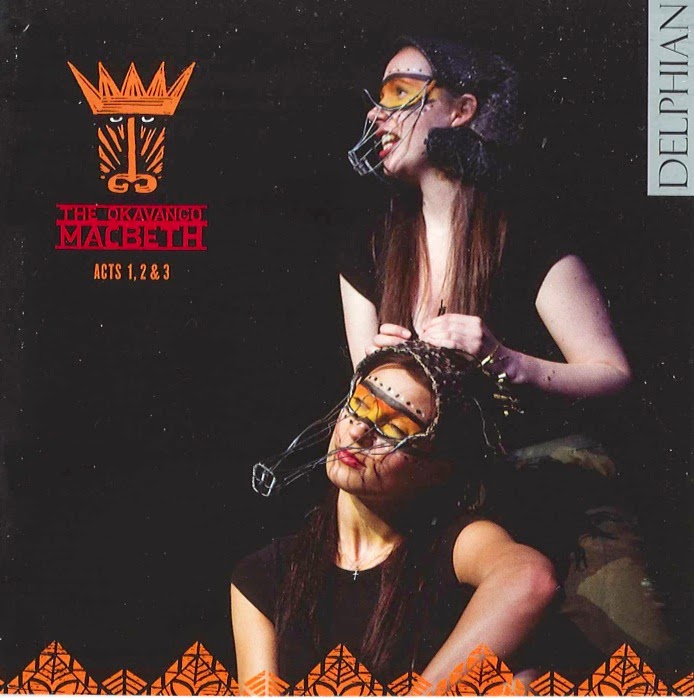 The Okavango Macbeth: A Chamber Opera. Libretto by Alexander McCall Smith. Comp. Tom Cunningham. Dir. Nicholas Ellenbogen. Perf. Mr. McFall's Chamber Orchestra and Edinburgh Studio Opera Chorus. 22-23 April 2011. Delphian, 2011. CD.
No, I'm not on about the infinite monkeys alluded to in Douglas Adams (for which, q.v.). Nor do I refer to the Monkeys that did Romeo and Juliet (for which, q.v.). No, I'm talking about The Okavango Macbeth.

"What's The Okavango Macbeth?" I hear you asking. Ah, well, there's the rub. I chanced upon our library's holdings of an audio recording of this opera (for it is an opera) while teaching the English majors at my institution the finer points of research. Why I was trying the search term "baboon" (for it is about baboons) escapes me for a moment, but it may have had something to do with Romeo and Juliet: A Monkey's Tale, about which we had just been talking. How Macbeth got in there (for it is about Macbeth) is also something of a mystery, but I had Macbeth on my mind and was showing the class how to use some of the Boolean operators to reduce a result list of thousands down to a manageable few dozen.

In any case, we chanced upon a title that seemed to have to do with Macbeth even though the Library of Congress subject heading was "Baboons -- Songs and Music." My jaw dropped as I realized that I had once heard of this show and that I could (if I wished) listen to it right then and there with my entire class.

I didn't, of course, but I did manage to put in on later. In fact, it’s quite good—both the libretto and the music are fairly deep and haunting. The author of the Libretto is Alexander McCall Smith—he of The No. 1 Ladies' Detective Agency. The work is set in Botswana—that of the Okavango River Delta and the Moremi Game Reserve.


Here are the program notes' summary of the first three acts (there are four in all):

Act One
The animals recall the time when all lived together in peace but then came drought and famine—greed was born.  The animals blame the baboons.

Act Two
The primatologists set up camp in the delta and agree that they will watch the baboons but never interfere.  The baboons then emerge and observe the humans–such strange, unfinished creatures–and agree that they will watch but never interfere.  Two of them, Lady Macbeth and her friend, complain about the males and start scheming.  When Macbeth arrives, she flatters him, but he reminds her she must marry Duncan according to Baboon Law.  She urges Macbeth to kill Duncan.

Act Three
As evening approaches, the primatologist reflect on the nature of animal behavior.  Lady Macbeth consoles Duncan whose kingly responsibilities fall on his weary shoulders.  She lulls him to sleep.  With some difficulty, she encourages Macbeth to kill him.  The following morning, the primatologists come across the body of Duncan and discern evil in nature’s paradise.

There are a few scattered videos of pieces of performances available on YouTube. Here's one of an Act Four song entitled "Grubs First, then Ethics."

Affairs of state
And love and hate,
That keep the great
Awake at night,
Are from our sight
Concealed:
Grubs first, then ethics.
Beneath the ground

That's great, and it gives a good sense of the production. There's quite a bit of good humor there—and some particularly good voices.

A more serious scene (and one for which I can't find a video counterpart) involves an exchange between Lady Macbeth and Macbeth.

Lady Macbeth:
My lord Macbeth is come,
The one who is all glorious,
In my eyes, O georgeous one,
My lover bright, in courage spun;
Who sends the leopard to his cave;
And in whose presence weak are brave,
Who takes the sun from out the sky,
And plucks the eagles as they fly
With talons drawn, and dashes them,
And dashes them, and dashes them.

Macbeth:
Is that me whom you describe?
Am I so brave who once was . . .

Lady Macbeth:
Brave, and always was.

Macbeth:
A man may think he’s
Something other
In the generous praise
Of a lover.

Lady Macbeth:
A woman sees the best in men,
A woman finds those depths often
Unseen by man himself.

Lady Macbeth:
Only one; you are the one and
Only one I think of
When I’m lonely.

Lady Macbeth:
Baboon law?  What is the law
But the way people have done things
They could have done
Otherwise if they had thought?

Macbeth:
It is the law;
there is no more
to be said about it.
We cannot break
Nor lightly take it
Another way.
It is the law.
And the law says
Duncan, it is Duncan
Who will be your mate;
Duncan, the powerful,
Duncan, your destined
Husband.

Lady Macbeth:
But I want you.

Macbeth:
Me will kill a rival:
Do not ask me
To put my head upon a block.

Lady Macbeth:
Then kill him first, my lovely,

Lady Macbeth:
Then kill him now, my honey,

Macbeth:
I cannot do it.

Lady Macbeth:
Then kill him now, my darling.

Lady Macbeth:
But he must sleep, all creatures sleep,
The mighty lion must also sleep
The leopards may by moonlight creep,
But they, too, sleep; but they, too, sleep.
And in this sleep where is his strength,
If in his sleep through night-time’s length,
He cannot see, he cannot hear?
And one who strikes need never fear
The strength of one who isn’t there.

Macbeth:
I am not sure.


I would really like to see a production in its entirety. And, with my preoccupation with Shakespeare in Africa, I'd like to explore any particularly African resonance that might be there (if any). In the meantime, it's astonishing to know that this exists and that, for at least some university libraries, a recording of the entire opera is only a click away.
Click below to purchase the CD from amazon.com
(and to support Bardfilm as you do so).

Book Note: Y is for Yorick 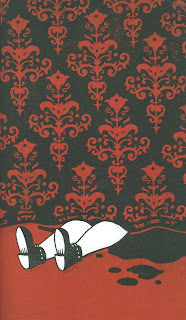 Adams, Jennifer. Y is for Yorick: A Slightly Irreverent Shakespearean ABC Book for Grown-Ups. Layton, Utah: Gibbs Smith, 2011.
I want to take a little time out from grading papers to call attention to a little volume I just obtained. I saw this in a used bookstore, and I just couldn't resist.

Y is for Yorick is a deliciously tongue-in-cheek Shakespearean alphabet book. Indeed, I think Yorick himself, known to be a fellow of infinite jest, would have been set on a roar by some of the pages—such as the image to the right. Any guesses as to who is illustrated there?

The book runs through the entire alphabet, repeating irresistible letters like O (Ophelia and Othello) and H (Hamlet, Henry V, and Henry VIII).  Even though it takes a few easy outs with Q (why Queen rather that Quickly, Quintus, or Quince?), X, and Z (ah, that whoreson Zed—that unnecessary letter!), it's quite enjoyable.

To give you a feel for the book, I'm providing the pages for B, I, and J. 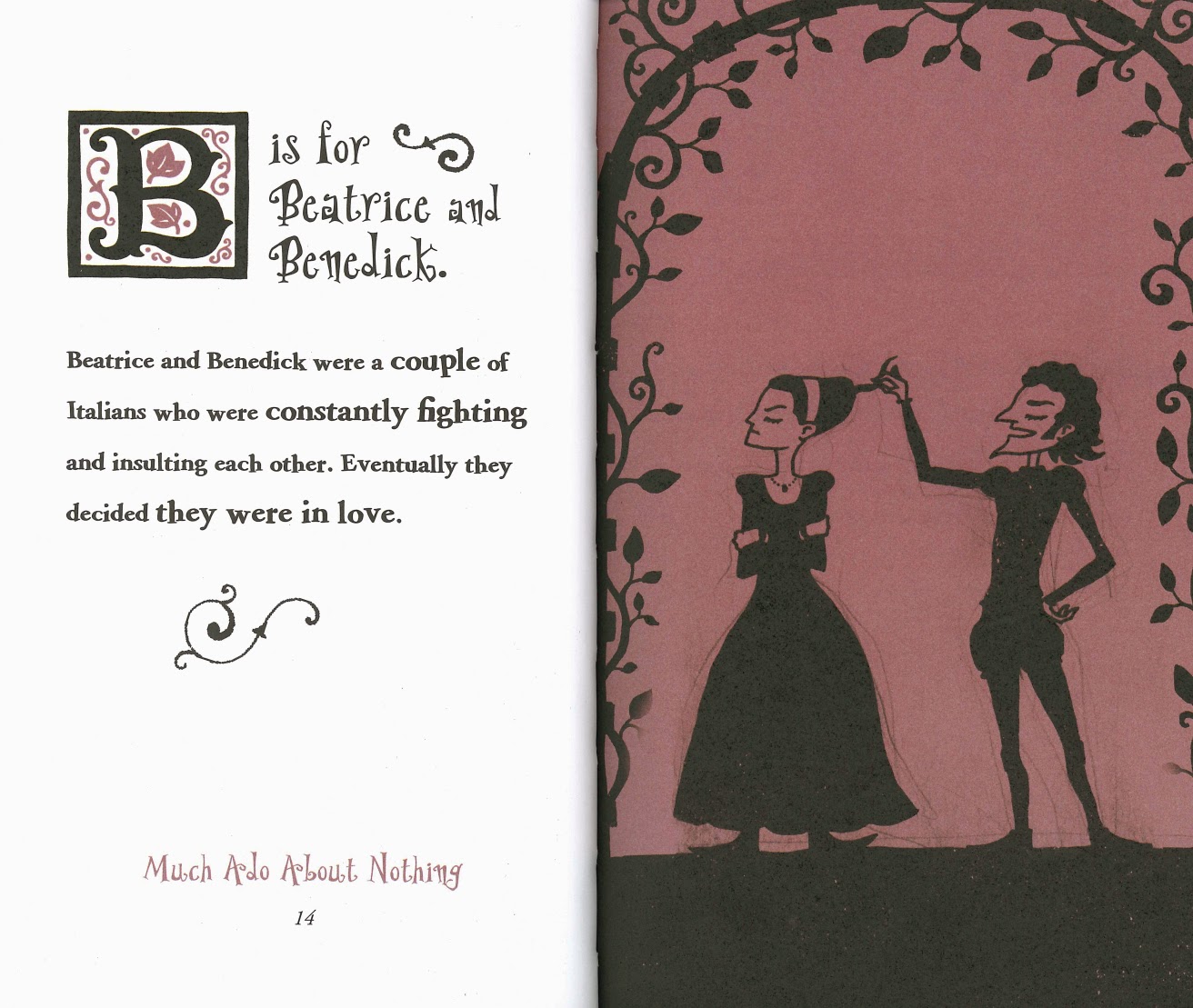 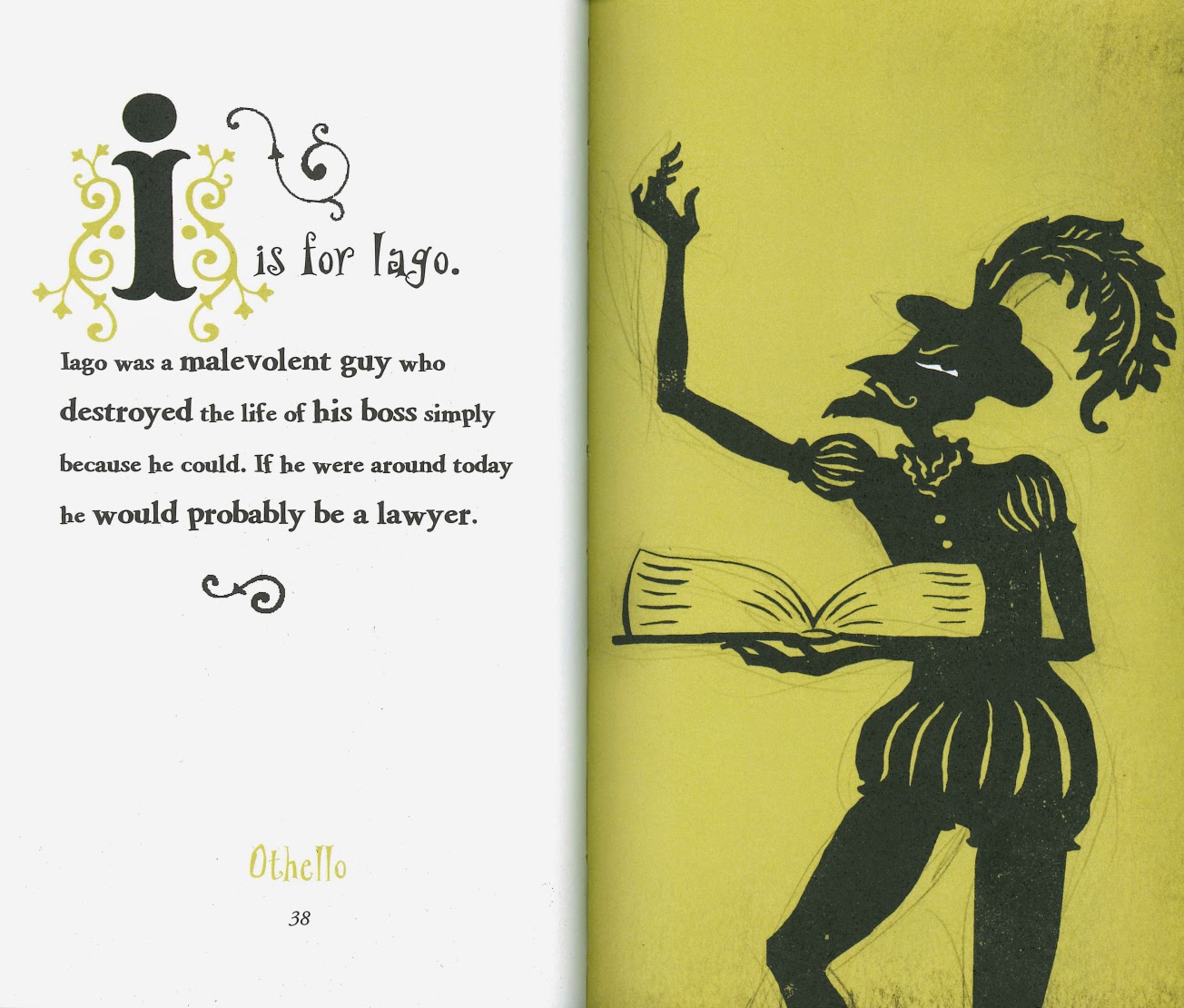 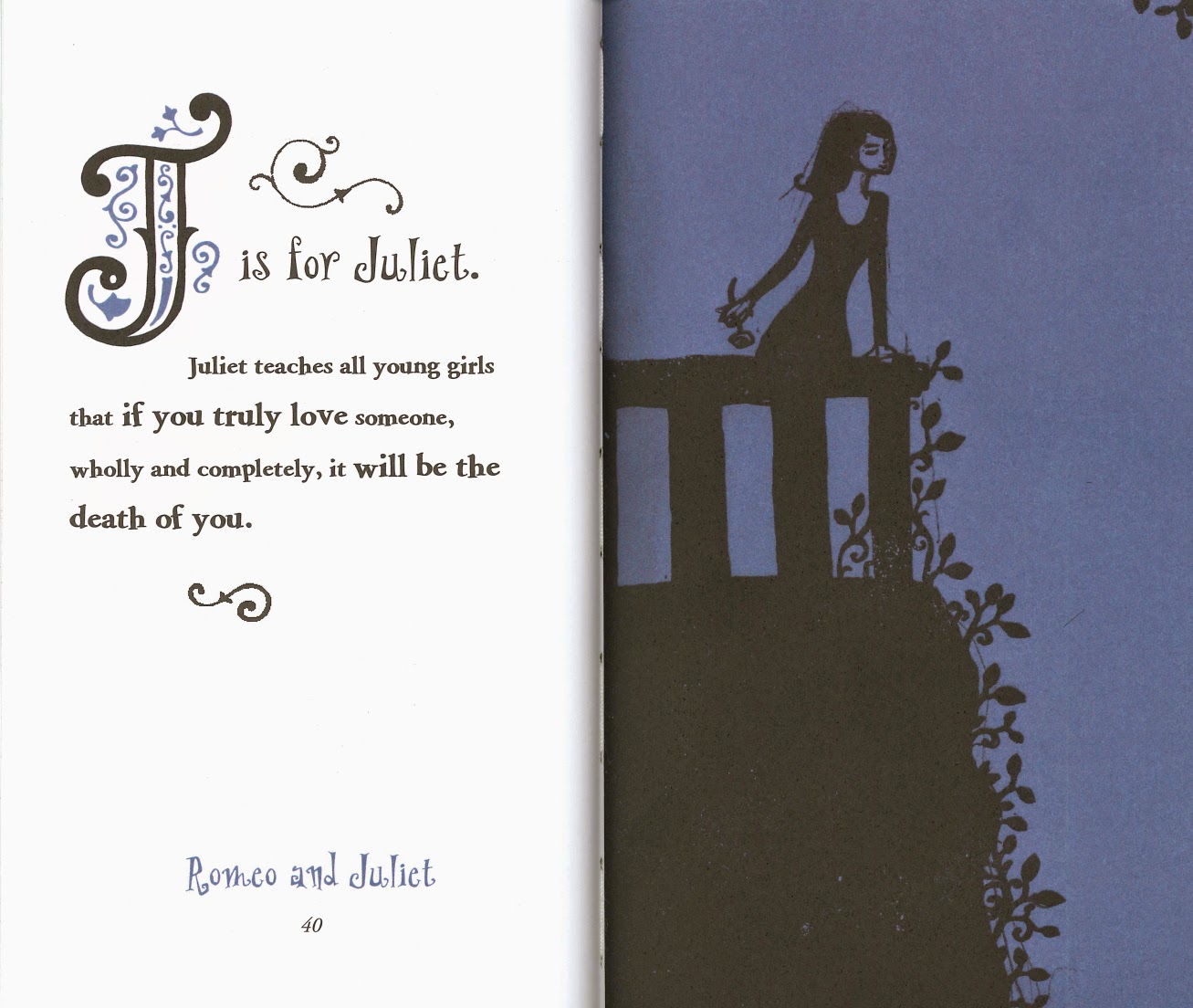 There you have it—except to add that there are holidays coming up . . . and there are Shakespeare lovers out there . . . and people have a lot of wallets and purses . . . and they gotta buy something.