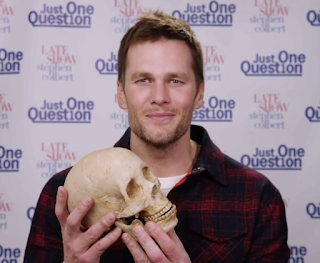 A little while before Super Bowl LIII, Late Night with Steven Colbert put out a "Just One Question" segment in which people asked the players . . . well, just one question.

Tom Brady answered his question by indicating his desire to play Hamlet. He then delivered a bunch of lines in a "Shakespeare Acting Accent." Shakespeare Geek was impressed that he chose to use the Folio for Hamlet's last line rather than Q2, which is the more common choice.

In any case, I've excerpted just the Hamlet sections from the skit. Enjoy!

Note: F has four Os; Tom Brady only gives us three. It's an interesting acting decision, and I think it works almost as well as the four-O version.