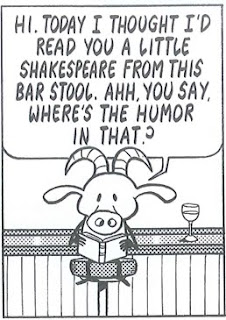 Book Note: Fakespeare in the Park 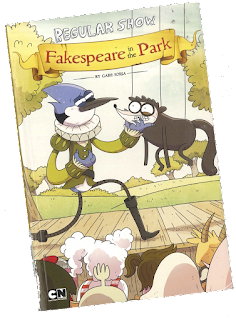 Soria, Gabe. Fakespeare in the Park. New York?: Cartoon Network Books, 2016.
I'm pretty much utterly nonplussed about this volume. I have no sense of the context for it. Occasionally, people write me and ask if they can send me something Shakespeare-related, and I generally say, "Sure." That's how this came my way.

It's a work of juvenile fiction published by Cartoon Network Books. And it may have something to do with something called The Regular Show.

I've tried to gain some quick context, and I gather that there's a blue jay and a raccoon. They work for the park service, and they're not very good at their jobs.

As near as I can tell, this is not a novelization of an actual event on the show. If it were, it would provide the context more easily and be more accessible to the causal, mildly-interested bystander.

If you know the show and are a fan, you may find this quite amusing.  After a number of false starts and quirky setbacks, the characters are able to put on a play they call The Most Awsome Exploits of MacDeath, a Veteran Constable, and Juliet, his Squire. Here's a quick sample: 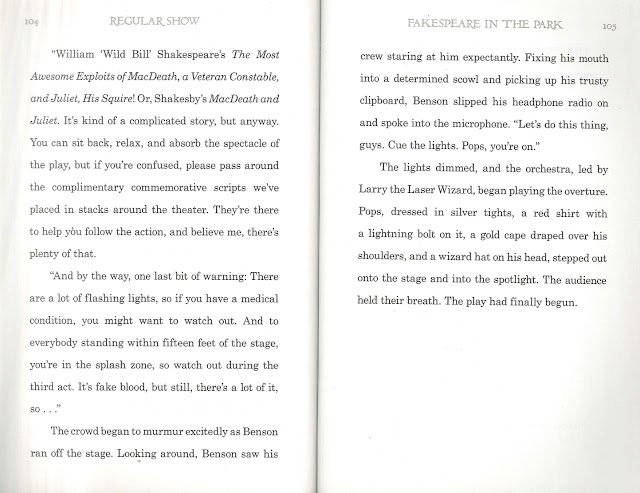 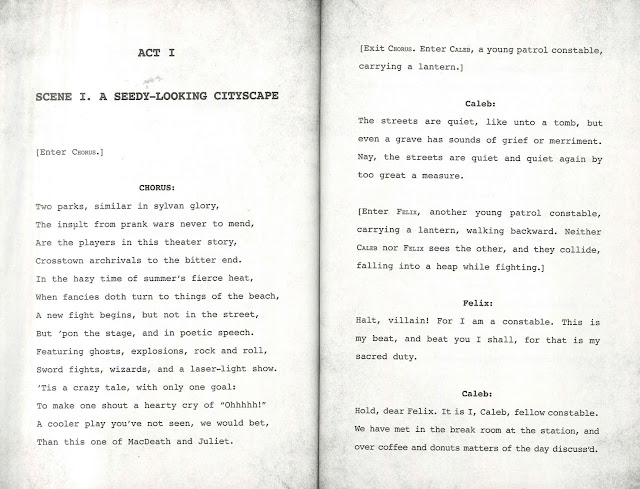 There you have it. If you know the show, you may like it; if you don't, you're likely to be nonplussed.
Click below to purchase the film from amazon.com
(and to support Bardfilm as you do so).

Book Note: Shylock is my Name 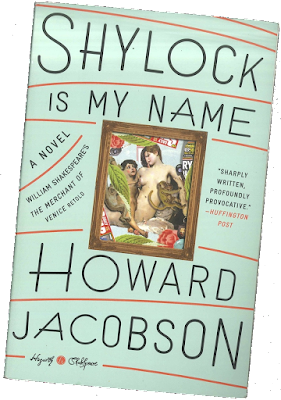 But Shlock is my Name was profound in its grappling with Shakespeare's play—while making it its own and inviting us to look back at Merchant of Venice.

It takes a while for everything to build, but we essentially have the story of Simon Strulovitch, whose daughter is running wild and who intends to marry a christian. His story is set in contemporary England (contemporary to us, that is, not to Shakespeare).

He meets Shylock in a graveyard. At first, Shylock seems to be contemporary to Strulovitch, but it becomes clearer and clearer that Shylock's story has been completed and the Strulovitch is echoing it. Shylock then stands as a guide to Strulovitch's experiences—and also as a touchstone for how Christians have treated / are treating Jews. Ambiguity over whether he is to be taken as real or as an emblem for Jewishness fills the novel's pages.

The novel's plot is cleverly woven together, and it leads to Strulovitch demanding that the man with whom his daughter has eloped / run away become circumcised (this becomes the modernization of the "pound of flesh"). When he can't be found, Strulovitch demands that D'Anton, the man's older mentor and friend, take his place.

I leave you to discover the rest on your own . . . except that I want to provide this novel's take on the "Quality of Mercy" speech. Here, it's given to Shylock. It's toward the end of the novel, and Shylock is asking Strulovitch to reconsider his demand for circumcision.  [Note: There is some coarse language here. So watch it.] 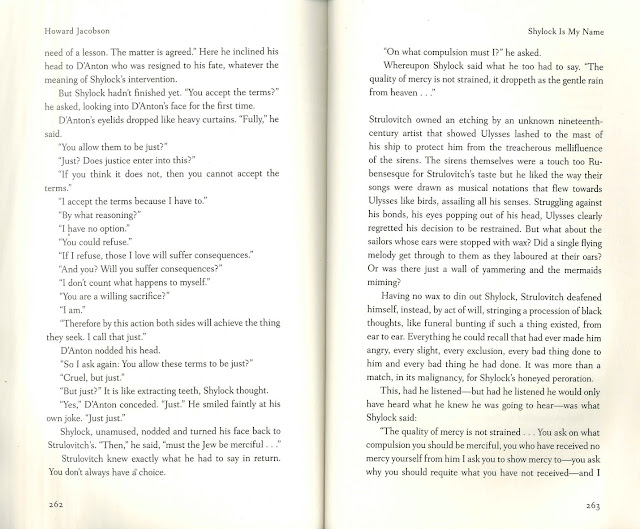 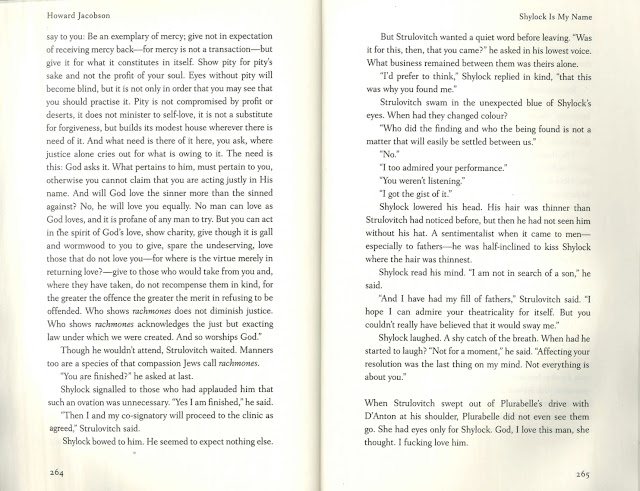 The kinds of things this novel does are the things all the Hogarth Shakespeares ought to do. 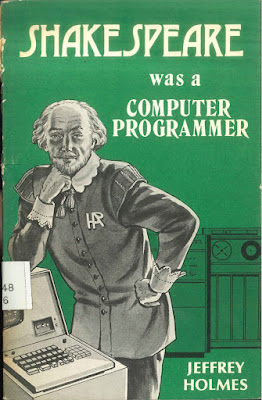 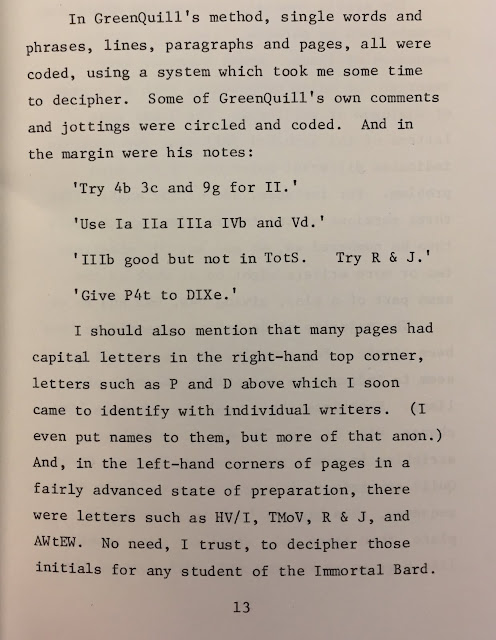 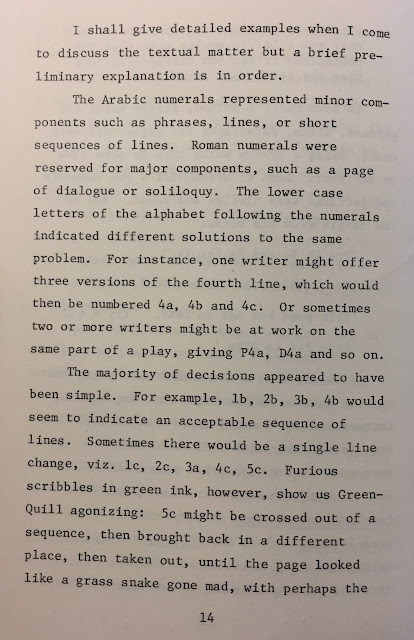 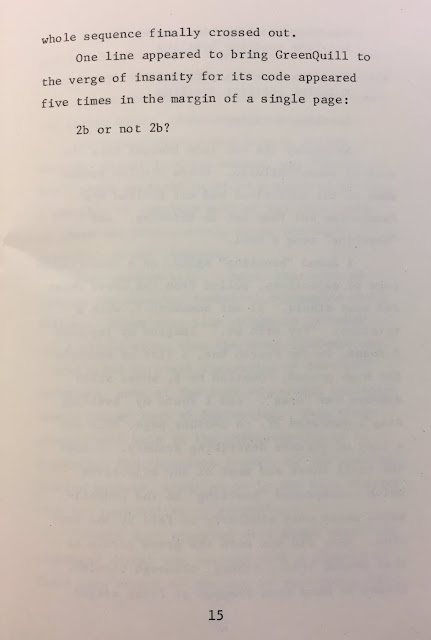