Angoor: A Bollywood Comedy of Errors 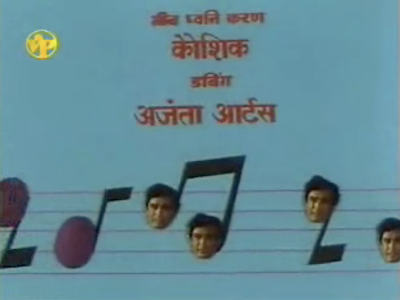 Angoor. Dir. Gulzar. Perf. Sanjeev Kumar, Moushumi Chatterjee, and Deven Verma. 1982. DVD. N.s., n.d.
This film has been on my "to watch" shelf for an extremely long time. At first, I had a copy without any subtitles. It was interesting, but I was as lost as a bloodhound with a cold. Finally, I tracked down a DVD with English subtitles, but it took me a while to cycle around to Comedy of Errors again.

It was worth the wait—at least marginally so. The film follows the plot of Shakespeare's play fairly closely, but with some modernizations and some differences in character development. One of the Antipholuses (Antiphonlii?), for example, is a devotee of paperback detective stories. When he arrives in town, he's automatically suspicious of everyone and everything because his head has been filled with gangs and double agents and so on. An additional modernization involves the suspected use of drugs. Whenever a master doesn't recognize a servant (or vice versa), the mistaken one is accused of using hashish. In one elongated scene, the set of Dromio and Antipholus from out of town feed the wives of the other set some eggplant fries laced with hashish.

I was hoping too see more particular engagement or transmigration into the local culture. Still, the local setting worked well—and the plot of the play generally carries the day.

The clip below shows the opening frames of the film—where the film foregrounds its indebtedness to Shakespeare—and then a bit of the confusion of mistaken identities in this setting. It closes as the film closes—with a return to the portrait of Shakespeare. Enjoy!