“Shakespeare: Drama’s DNA.” Perf. Richard Eyre, Peter Brook, and Judy Dench. Dir. Roger Parsons. Changing Stages. Episode 1. BBC. 5 November 2000. Videocassette. Films for the Humanities, 2001.
As readers of Bardfilm know, we at Bardfilm try to document all the materials we use. Only occasionally do we find ourselves unable to provide full bibliographic information about the films and books we mention here.

However, we sometimes have to throw up our collective arms (that's an image for you) and acknowledge that we do not know the source and cannot track it down.

This is the case for a brief musical interlude that is at the end of the documentary mentioned above. As that volume ends, a delightful jazz number swells over the credits—credits that do not credit the author or performer of the song. Googling the lyrics, often a productive way of finding what others have said about them, produced nothing. To the best of my knowledge and belief, this is the only site that contains the lyrics to the song (which must, for the time being, rest both anonymous and untitled).

First, here's the song (with a slideshow of Shakespeare images provided by Bardfilm); the lyrics follow.


And here are the lyrics:


To be or not to be: That's the point, of course.
Lead on, Macduff. The Game's afoot. My Kingdom for a horse.
Once more into the breach, my friends—into the breach once more!
All the world's a stage, my friend: let slip the dogs of war.
If music be the food of love . . .

And here's an appeal: If any of you can provide information about this song, please do so in the comments below! Thank you very much!

Oh—the image above ought to have its own bibliographic entry! It's from I'm Not There, a film about Bob Dylan—one which has a very brief Shakespeare-related exchange (which is almost entirely encapsulated in the image above). Here's the bibliographic reference:


Click below to purchase I'm Not There from amazon.com
(and to support Bardfilm as you do so). 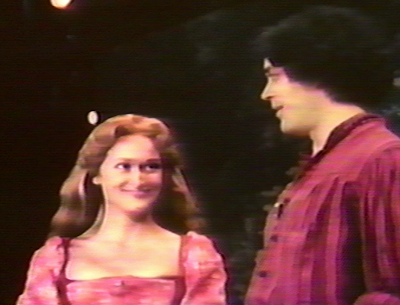 
Note: A total of four clips of this production are available on this blog: The First Clip, The Second Clip, The Third Clip, and The Fourth Clip.Links: The Film at IMDB.
Copyright 2008-2039 by kj at 3:33 PM 4 comments: 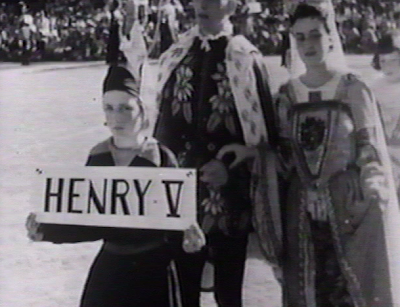 The Tempest. Dir. William Woodman. Perf. Efrem Zimbalist, Jr., William Hootkins, and Duane Black. 1983. Videocassette. Century Home Video, 1983.
While we're in a tempestuous frame of mind, we might consider the performance of Prospero that Efrem Zimbalist, Jr. gave us. The name itself is quite weighty. It sounds like a big-time, old-school studio executive with a cigar to match his temper and an ego bigger than both put together.

The performance is not quite as weighty as that sounds, but it is better than what you might expect from a big-time, old-school studio executive with a cigar to match his temper and an ego bigger than both put together.

[Note: Efrem Zimbalist, Jr. was not a big-time, old-school studio executive with a cigar to match his temper and an ego bigger than both put together. Neither was Efrem Zimbalist, Sr. The later (who was the former, chronologically speaking) was an extremely famous concert violinist; the fomer (who came later) made his big break as Dandy Jim Buckley in Maverick in the 1950s.]

The Tempest. Dir. George Schaefer. Perf. Maurice Evans, Richard Burton, Roddy McDowall, Tom Poston, Liam Redmond, and Lee Remick. 1960. Videocassette. Films for the Humanities, 1983.
Roddy McDowall has been in just about everything, so we probably shouldn't be surprised to find him playing Ariel opposite Richard Burton's Caliban in the 1960 made-for-TV production of The Tempest.

McDowall's Ariel looks like a cross between the Sewer Urchin (from the animated version of The Tick—in one episode of which, Roddy McDowall played a villain named "The Breadmaster," by the way), an echidna, and . . . um . . . Roddy McDowall.


Yes, it's a little hard to imagine.  Fortunately, you can let us on your imaginary forces work.  Think, when we talk of Roddy McDowall as Ariel, that you see him in the clip below, singing "Where the bee sucks, there suck I" with occasional slapstick orchestral punctuation: