I am the Very Model of a Professor Shakespearean 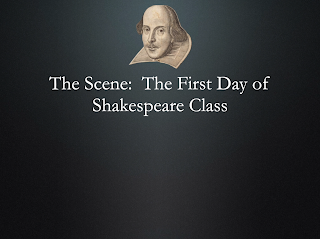 I am the very model of a Professor Shakespearean.
I know that Hamlet’s Danish and that Twelfth Night is Illyrian.
I know the plays are comedy or tragedy or history
And that the English Drama has evolved from plays of Mystery.
I can tell trochaic trimeter from iambic pentameter
And know that Fortinbras is a Norwegian or a Laplander . . .
I see that Romeo for Juliet had what is true desire . . .

And I can quote the speech that has the line “O, for a muse of fire.”

When reading King Lear, I suggest that Gloucester really ought to see;
And I’ll enliven dinner dates with a “to be or not to be.”
And if you mention pirates, I say “Hamlet’s trip buccaneerian”—
I am the very model of a Professor Shakespearean.


I’m pretty sure I know to whom Shakespeare left all his underwear;
I also know which play has someone exit pursued by a bear.
Both Much Ado and Henry Five—I’ve seen the films Branagh-ger-y—
And I can yell, “Is this a dagger that I see in front of me?”
I know that all the world’s a stage and that each one must play a part.
I know Bernardo’s cold and that Fransisco’s really sick at heart.
You know I can decipher all the speeches of Polonius . . .

And nearly all he says is merely dictum ab bolonius.

I can say which character would trade a kingdom for a measly horse,
And if you call for sonnets, I can quote you every one, of course.
And I remember Hamlet’s line “a satyr to Hyperion”:
I am the very model of a Professor Shakespearean.


In fact, when I can tell all seven bloody Henry plays apart
And even sit though that play with the fat guy in the laundry cart—
When I can play the Scottish play with bagpipes or accordian
And have the sharpest answers for the most confirmed Oxfordian—
When I can tell if it’s a fretful porpentine or platypus,
And pronounce honorificabilitudinitatibus—
In short, when I know every bit of bawdy joke and knavery,

You’ll say a better Professor Shakespearean could naaver be.

For my knowledge of Will Shakespeare, though I’ve seen an awful lot of films,
Is limited because, quite frankly, I can become overwilmed.
But I know Hamlet’s Danish and that Twelfth Night is Illyrian:
I am the very model of a Professor Shakespearean.
And there you have it. Now you know what it's like to be in one of my Shakespeare classes!
And I'd just like to add, as a brief codicil, these points:
Yes, I know there's another genre called "Romance"—and (conceivably) even another called "Problem Play"—but I only had so many syllables to work with.
Yes, but you try coming up with a rhyme for "film."  At least mine has a bit of a pun on Shakespeare's name.
Yes, the "nearly" / "merely" internal rhyme is quite nice!  Thank you.
And if you didn't get enough here, why don't you write your own verse and post it in the comments?  Or head over to Good Tickle Brain and sing her "Modern Major Shakespeare Fan" number? Its rhythm, in particular, is commendable.
If you enjoyed this—or, frankly, whether you enjoyed this or not—you can also try "Shakespearean Rhapsody," "Danish Paradise," "Dunsinane Prison Blues," or "Let's Do It (Let's Fall in Love . . . with Shakespeare)." Or steer toward this musical version of King Lear's madness. Alternately, investigate the big number from the musical Pyramus. If you're desperate for something to do with Richard III, you could try the (admittedly not very well performed) "I'll Make a King out of Me."  Or you could listen to this musical PSA that warns people to stay clear of the Great River Shakespeare Festival.
[Note: Should the embedded video above go sour, here's a blog-native version.]
Copyright 2008-2039 by kj at 7:42 AM 1 comment: