Sayers, Dorothy L. Have His Carcase. New York: HarperPaperbacks, 1993.———. The Five Red Herrings. New York: HarperPaperbacks, 1993. I've read and re-read a lot of Dorothy L. Sayers, from Whose Body? to Busman's Honeymoon, from her translation of The Divine Comedy (and its magnificent notes) to The Mind of the Maker and back again. And I've listened to all the Lord Peter Wimsey detective novels and stories (primarily as read by the magisterial Sir Ian Carmichael) innumerable times.

In the mysteries, the characters—and, yes, the author—integrate quotes and allusions from a wide range of authors . . . most notably (for me, at least), Shakespeare.
The quotes from and allusions to Shakespeare are as thick as autumn leaves in Vallombrosa (all right—that frequent allusion in Sayers is actually to Milton); they're so thick that they could easily be the subject of a Master's thesis—or even a doctoral dissertation.
On a few occasions, we get a lengthier engagement with Shakespeare. In Have his Carcase, for example, Wimsey interviews some theatrical agents—and it leads to a conversation on interpretations of Richard III: 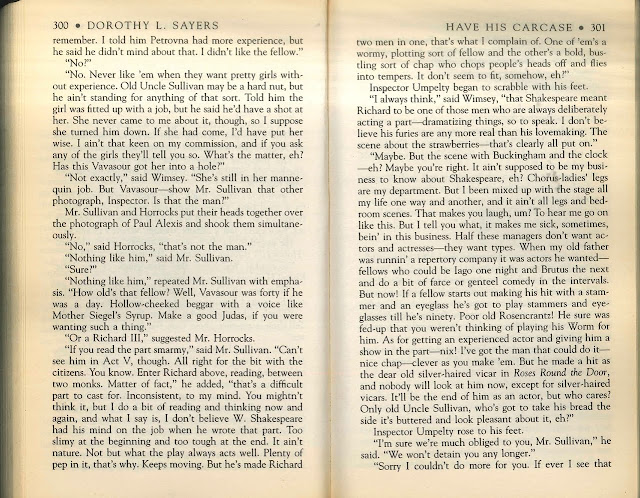 Later, this seemingly-tangential conversation relates to the mystery (there's a character who has a slightly-hunched back).
More often, the characters—conceivably inebriated on the heady wine of literature—integrate phrases into their own speech. Here, Wimsey starts with Hamlet and ends with Othello when a disturbing revelation comes upon him:

In the following exchange, Harriet Vane, who is ably assisting Lord Peter to investigate the murder or suicide of a man whose body she herself found on the beach, notes that Wimsey is prone to such quotations in moments of excitement: 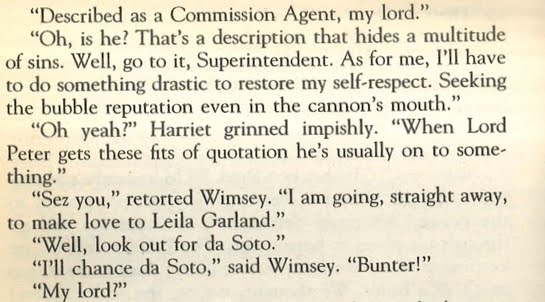 As a final favorite example (for now), here's a moment from The Five Red Herrings in which one of the suspects of the murder of Campell starts to reveal his true (or is it true?) whereabouts during the time of the murder and why he didn't tell Constable Duncan about them at once: 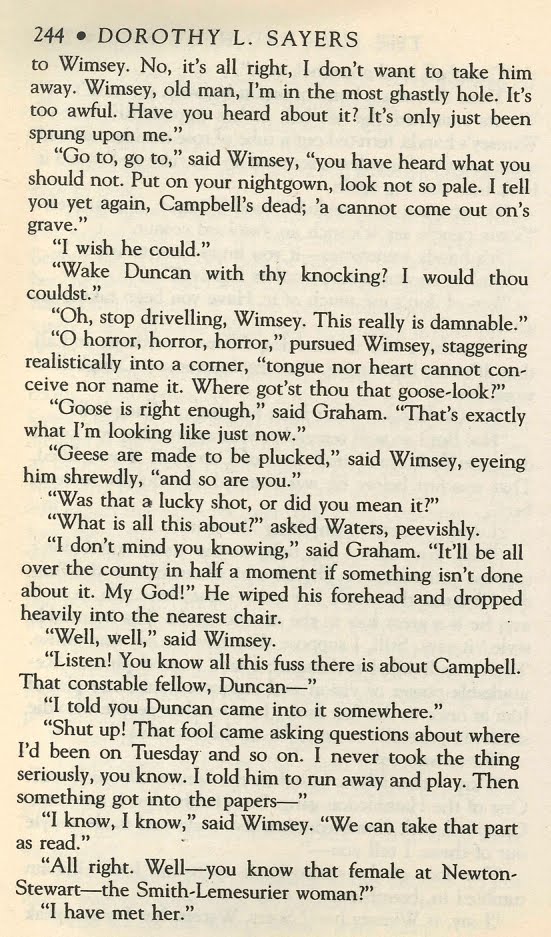 Sayers' novels are remarkable enough, but the Shakespeare really gilds refined gold, paints the lily, and shakes a dash of Chanel No. 5 on the violet.
Click below to purchase these two books
(just as a starting point, mind you)
from amazon.com
(and to support Bardfilm as you do so).

"And tomorrow and": A Shakespeare-Related Sci-Fi Short Story 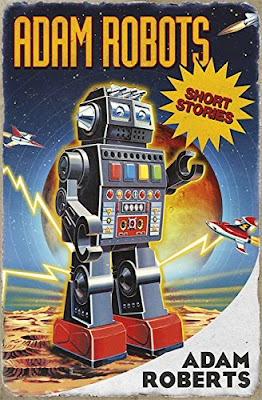 The story retells the ending of Macbeth with the assumption that the witches were not equivocating.

It's a version of the usual "Wait a minute—people born by caesarean section are clearly born of women . . . what else could they be born by?" objection to the Weïrd Sisters' charm, but cleverly done.

I'm giving you a scene from early in the story where Macbeth and Macduff put down their swords and pick up a dictionary to settle the issue: 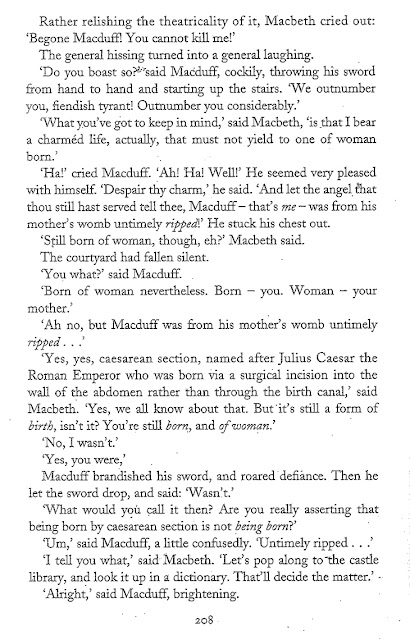 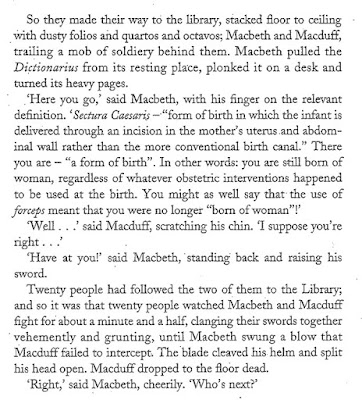 I find that to be quite fun—and that would almost be enough, but the story continues quite a distance into the future and arrives at a clever solution that reminds me of one of the stories in The Martian Chronicles.

You can read the whole story yourself here.  And we can all be grateful for the attentive readers of Bardfilm—among whom you can count yourself.
Links: The story on Google Books.

Click below to purchase the collection from amazon.com
(and to support Bardfilm as you do so).

Book Note: The Shakespeare Almanac / Shakespeare's Sonnets Registered on this Date in 1609 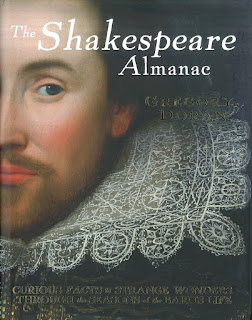 Doran, Gregory. The Shakespeare Almanac. London: Hutchinson, 2009.
Shakespeare Geek asked me if I'd ever seen this volume.  I hadn't, but I tracked down a copy through Inter-Library Loan. And then I bought myself a copy.

The book is a trip through the year with Shakespeare-related events, accomplishments, and trivia, and I've generally been pretty impressed and interested in what it has to say.

I'm providing the page for today below. I mainly know of 20 May as the date of the registration of Shakespeare's Sonnets . . . but Doran gives us a fair bit more than just that: 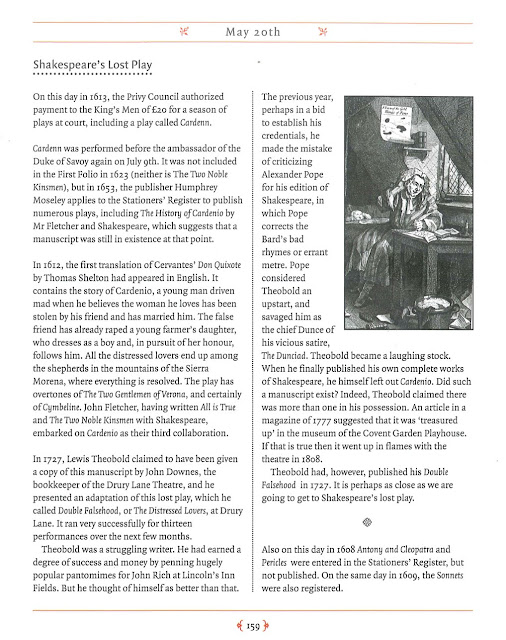 I've only spotted one error in the book so far (the page for April 23 says that Shakespeare was baptized on April 25—but it was really on April 26).

The book is very interesting and would make a good addition to the library of any Shakespeare aficionado.
Click below to purchase the book from amazon.com
(and to support Bardfilm as you do so). 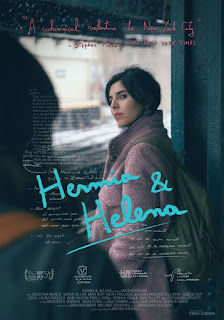 Hermia & Helena. Dir. Matías Piñeiro. Perf. Agustina Muñoz, María Villar, Mati Diop.  Trapecio Cine, Ravenser Odd, and Cinema Conservancy. 26 May 2017 [US Theatrical Release].
I've heard a bit about this film from time to time, and it's about to have a US release. During the past few weeks, I've been paying more attention to Shakespeare in Spanish, so a film about a woman who is translating Midsummer Night's Dream is intriguing.

But that's not all that's intriguing!  From the plot and the trailer, it looks like quite a promising film.  The Film Stage has an entry on the film here. They offer this plot summary:


Camila (Agustina Muñoz, The Princess of France), a young Argentine theater director, travels from Buenos Aires to New York for an artist residency to work on a new Spanish translation of Shakespeare’s A Midsummer Night’s Dream. Upon her arrival, she quickly realizes that her work isn’t compensating for the loss of her friends and the lover she left behind. When she begins to receive a series of mysterious postcards from Danièle (Mati Diop, Claire Denis’s 35 Shots of Rum), a former participant in the same residency, Camila second-guesses her artistic endeavors and begins to seek answers about her past. Hermia & Helena mingles actors from Matías Piñeiro’s Buenos Aires repertory with stalwarts of New York’s independent film scene (Keith Poulson, Dustin Guy Defa, Dan Sallitt). It is a film of dead ends and new beginnings, navigating amorous detours across hemispheres and languages, in which the words of Shakespeare clash with the entanglements of modern, digital life.

And here's the official trailer:

Whenever I give a final examination in Shakespeare and Film, I show the students a couple of clips that they have to analyze on the spot. It's a good assignment, giving them a chance to demonstrate both the vocabulary and the skills of analysis that they've been developing through the course.

It's always something we hadn't covered in class, and I always show them two clips and have them choose the one they feel they can write about best. I also always tell them that I don't want a review or a summary of the plot; instead, I want them to develop an essay that analyzes the decisions the director(s) and the actor(s) have made, not one that critiques their ability to carry it out.

This year, I showed them a clip from the Fodor Hamlet. It's not a Hamlet that I particularly like—I don't think it works that well overall. But the nunnery scene has a lot that the students can write about, including the interesting shift from Polonius, Ophelia's father, to Polonia, Ophelia's sister:


I'm wondering what direction the students who choose that clip will take their essays. Will they talk about how the power dynamic changes with the shift from Polonius to Polonia? Will they talk about the disorientation the film intends us to have—preventing us from knowing exactly how the observation of Hamlet and Ophelia works? Will they talk about the seagull / dolphin sounds and whether they appear to be diegetic or non-diegetic? I do hope they do something like that—rather than critiquing the acting and the film-making (which is, admittedly, bad—but which isn't meant to be the focus of their essays).
Links: The Film's Official Web Site.