A Rare Typo in an Arden Edition

Shakespeare, William. King Lear. Ed. R. A. Foakes. Arden Shakespeare. Third Series. London: Routledge, 1997.Shakespeare, William. King Lear. Ed. Kenneth Muir. Arden Shakespeare. Second Series. London: Routledge, 1972.Shakespeare, William. The Parallel King Lear: 1608-1623. Prepared by Michael Warren. Berkeley: University of California Press, 1989.Shakespeare, William. The Riverside Shakespeare. 2nd ed. Gen. ed. G. Blakemore Evans. Boston: Houghton Mifflin, 1997.In re-reading King Lear once more, I was working through Lear's speech on the heath when he has encountered Edgar, who is disguised as Poor Tom. And something struck me as odd . . . unusual . . . unfamiliar.
"Could it be a typo?" I thought. I then dismissed the thought. After all, this is the Arden edition. How many times had this text been viewed by how many people? "It's your overwrought imagination," I told myself, "combined with the work you're doing for your editing and proofreading class.
But then I looked again.
All right, I'll give away the spoiler. It was (and is) a typographical error! Before I walk you through the process I went through to confirm it as a typo, take a look at the image above or the image immediately below. Can you spot the error?

It's in the line "Here's three on's us [sic] are sophisticated." That "on's" is a contraction meaning "of us"—the extra "us" is merely superflux (that's a Shakespearean coinage from this very play).  "Here's three of us us are sophisticated" doesn't make sense.
But we are dealing with multiple texts of King Lear. Perhaps this merely reflects a textual variant.
I grabbed a couple other modern editions to see what they did with the line—and whether they had any note about that seemingly-extra "us."
The Arden Section Series edition did not have it:

Neither did the Riverside: 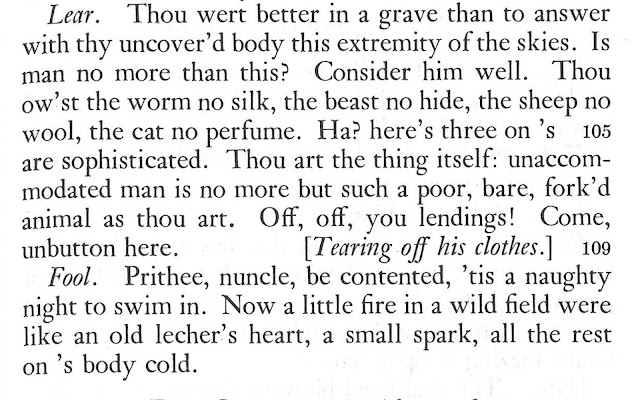 I then took a quick gander at my parallel text edition (for which, q.v.), which compares Q1 and F of Lear.

I like the spacing Q1 provides: "her's three ons are so phisticated."  It reminds me of the phrase "You think you're all that?  You think you're so phisticated, don't you?"
The long and short of it is that it is a typo—a genuine rarity in an Arden edition. Since it occurs over a line break, it's easy to miss. I've read that speech multiple times myself and never noticed. In other words, I'm not finding fault—I'm just finding interest!
Copyright 2008-2039 by kj at 7:00 AM 2 comments:

Two Quotes from Macbeth in an Episode of Doctor Who "Sleep No More." By Mark Gatiss.  Perf. Peter Capaldi and Jenna Coleman. Dir. Justin Molotnikov. Doctor Who. Series 9, episode 9. BBC One. 14 November 2015. DVD. BBC Home Entertainment, 2016.Well, that didn't take long! I was just complaining (mildly, to be fair) that an Agincourt reference in a Doctor Who episode didn't bring in any Shakespeare. Just a few episodes later, the Doctor quotes from Macbeth in an episode about sleep (and the lack thereof).
You can read the details of the plot of the episode by following the link at the end of this post. In the meantime, let's cut right to the Shakespeare:

We get two separate speeches from Act II, scene ii of Macbeth. They're both spoken by Macbeth very soon after the murder of Duncan. The first is slightly different from the text of the play. Here's how that reads:

The doctor drops "nature's second course" and drops the "great" down to the next line.
In the second scene, it seems like the Doctor is on the verge of giving us some Hamlet. He says, "To die . . . to die, to die," and I'm waiting for the ". . . to sleep— / No more" from III.i.59-60 of Hamlet. Instead, we get a different "sleep no more"—together with a pan across the room that reveals a bunch of potential daggers.
I'm not so sure about the concluding reflection on the Shakespeare speeches. It seems somewhat lacking. I take "He really knew his stuff" as a starting point for Shakespeare study; it seems to be something of a conclusion here. Still, I appreciate the working in of Shakespeare to this pop culture artifact.
Links: The Episode at IMDB.

A Henry V–Adjacent Moment in Doctor Who “The Woman Who Lived.” By Catherine Tregenna. Perf. Peter Capaldi and Maisie Williams.  Dir. Edward Bazalgette. Doctor Who. Series 9, episode 6. BBC One. 24 October 2015. DVD.  BBC Home Entertainment, 2016.
I'll admit that I haven't kept up with my Doctor Who. I lost interest somewhere in Series Seven. And I haven't really recovered it. But I've had some episodes on in the background while doing other things, and that enabled me to notice a brief reference to the Battle of Agincourt.
The plot involves a character that the Doctor last saw back in the age of the Vikings. He healed her—but the healing granted her a kind of immortality.
In this scene, the character (a woman named Ashildr who is calling herself "Me") recounts some of her life experiences between the Viking era and the Interregnum. It turns out that she was at Agincourt:
No, that's not much.  And yes, alas, we don't get any direct connection to Shakespeare. Still, I thought I'd mention it! After all, it's a bit of Joan of Arc (think 1 Henry VI) meets Nym (among the "regular" soldiery in Henry V).
I don't expect any of the Doctors will revisit Shakespeare—the episode "The Shakespeare Code" (for which, q.v.) covered it well. But we can hope for Shakespeare-related plots and allusions to and quotations from Shakespeare. I'll keep my eye out.
Links: The Episode at IMDB.

Click below to purchase the Ninth Series from amazon.com
(and to support Bardfilm as you do so).