3 Henry VI in The Naked Truth 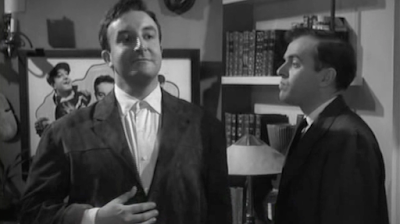 The Naked Truth [a.k.a. Your Past is Showing]. Dir. Mario Zampi. Perf. Terry-Thomas, Peter Sellers, Peggy Mount. 1957. DVD. MGM, 2005.
I've owed this post to an attentive reader for some time now, and I apologize for the delay.

The 1957 film The Naked Truth is a very good example of the madcap yet thoughtful British comedies of the 1950s and 1960s. With Terry-Thomas and Peter Sellers, how could there not be a great deal of fun and insanity?

The plot involves a clever blackmailer who develops an ingenious scheme that leaves him virtually untouchable. But his victims start separately plotting to murder him; eventually, they form a coalition to rid the world of this blot.

The Shakespeare comes in toward the beginning. The Peter Sellers character starts to contemplate murdering his blackmailer, and he quotes from Richard's speech in 3 Henry VI.

That's extracted from a speech about midway through 3 Henry VI when Richard (of Richard III fame) reveals his plan to make his way to the English Crown by removing all those who stand in the succession before him:

Why, I can smile, and murther whiles I smile,
And cry “Content” to that which grieves my heart,
And wet my cheeks with artificial tears,
And frame my face to all occasions.
I’ll drown more sailors than the mermaid shall;
I’ll slay more gazers than the basilisk,
I’ll play the orator as well as Nestor,
Deceive more slily than Ulysses could,
And like a Sinon, take another Troy.
I can add colors to the chameleon,
Change shapes with Proteus for advantages,
And set the murderous Machevil to school.
Can I do this, and cannot get a crown?
Tut, were it farther off, I’ll pluck it down. (III.ii.172-95)

The plan then gives Peter Sellers leave to put on all sorts of crazy costumes and to try out all the access of which he is capable (and he's capable of much). I was particularly struck by his Irish revolutionary—but you'll have to track down the film yourself to see that!

As a final note, remember that we've seen Peter Sellers in a Richard III role before—with the Beatles!
Links: The Film at IMDB.