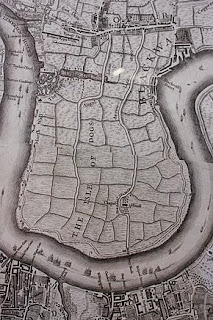 The contemporaneity of the two works caused the trouble. Shakespeare occasionally got himself into warm if not hot water (cf. the "I am Richard—know ye not that" episode), he largely avoided it by what we Shakespeare scholars like to call "The Thin Veil." By thinly veiling contemporary issues, Shakespeare was able to address them without causing such turmoil. After all, Shakespeare himself wrote a play about the assassination of a world leader whose succession was in question, yet 1599 (the year in which it was written and first performed) did not see the closing of the Globe Theatre; instead, it was one of Shakespeare most successful years.
Links: The Play at The Lost Plays Database.
Copyright 2008-2039 by kj at 10:01 AM No comments: