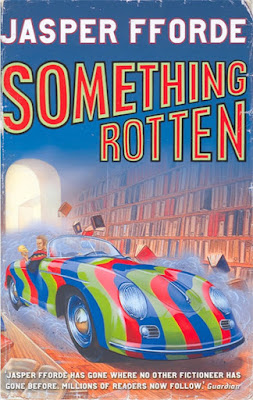 Fforde, Jasper. Something Rotten. New York: Viking, 2004.
Something Rotten is a confusing, fascinating, odd, genre-bending, bizarre, deep, shallow, adventurous, and thoroughly-enjoyable novel. If you can imagine something halfway between Terry Pratchett (for which, q.v.) and Douglas Adams (for which, q.v.), you've probably found something that is not entirely unlike Jasper Fforde.

Our protagonist, who is named Thursday Next, works keeping the world of fiction as it ought to be. Making sure that things from the genre of Greek Myth don't end up in the genre of American Western. That's a sly joke on the rest of the novel, which mixes, in a very metafictional way, all sorts of genres, from spy novel to alternate history to fantasy to sports novel to time travel and much in between.

Include Shakespeare in that mix. Indeed (as you may have guessed), that's why I read it.

In Something Rotten, Hamlet has left the fictional world of his play to see what people think of him in the non-fictional world of the rest of this book. Moreover (and meanwhile), the English government in the novel is working on an anti-Dane campaign—fearmongering to reassure its own re-election.

But it would take all day to try to trace even the merest outline of the plot. Instead, I'll give you a sample from early on. You'll meet Hamlet, you'll get a taste of the plot, and you'll even imbibe a bit of literary criticism. All that in two pages! If that doesn't encourage you to try this book, I'm not sure what will. 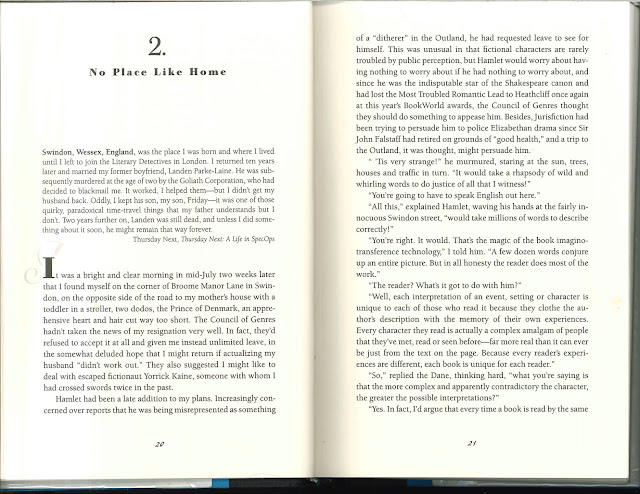 Note: I forgot to mention that the novel ends on a cliffhanger, so you'll want to have the next in the series—it's called First Among Sequels, if you're keeping score—handy when you get near the end.
Click below to purchase the book from amazon.com
(and to support Bardfilm as you do so).