Julia Stiles Plays the Prince of Denmark's Girlfriend Again— This Time, in The Prince and Me 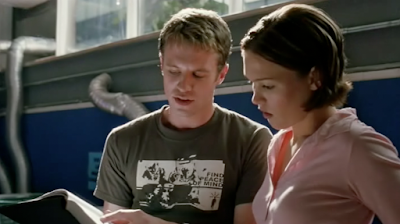 The Prince and Me. Dir. Martha Coolidge. Perf. Julia Stiles, Luke Mably, and Miranda Richardson. 2004. DVD. Warner Bros., 2004.
At first glance, this may seem like a less-grammatical prequel to The King and I. Instead, it's a modern romantic comedy with some Shakespearean connections.

In this film, the Prince of Denmark (inexplicably not named Hamlet) becomes bored with his life in the palace, watches an ad for something along the horrific lines of "Girls Gone Wild," and determines to hide his identity as Prince and to go to college in Wisconsin, USA. Meanwhile, a pre-med student worries about her grades and whether they'll be good enough for her to gain admittance to Johns Hopkins for medical school.

Despite having the great Julia Stiles—who has done a fair number of wonderful things with Shakespeare-related films (including her role as Ophelia in the Almereyda Hamlet), the film isn't great. First—well, look at the brief plot description above.  Second, it's enormously predictable. Here's a quick list of things I predicted with a fair degree of accuracy after about ten minutes of the film. [Note: These are spoilers in the technical sense, but they will probably only concern those who haven't yet watched the first ten minutes of the film. After that, they's so predictable as to stay technically out of the spoiler box.]
That need not ruin a film, of course. I can generally predict what's going to happen in most productions of Hamlet, but I keep watching those. The interest shifts from what happens to how it happens.

Two scenes are important and at least comparatively well done. [Note: I've separated them into individual clips below, but I've put all the relevant Shakespeare-related material into a longer clip at the end of this post.] The first is the "They will fall in love over Shakespeare" piece. Really, it's a "They will begin to fall in love over Shakespeare," which does help matters. In any case, one of my failed predictions was "If they use a sonnet, it will be Sonnet 116—'Let me not to the marriage of true minds / Admit impediments.'" Instead, they went with Sonnet 143, which is more complex and dense.  And they lead into that with a brief discussion of the faults of the more famous Prince of Denmark. I'll give you the clip and follow it with the text of the sonnet:

O me, what eyes hath Love put in my head,
Which have no correspondence with true sight!
Or, if they have, where is my judgment fled,
That censures falsely what they see aright?
If that be fair whereon my false eyes dote,
What means the world to say it is not so?
If it be not, then love doth well denote
Love's eye is not so true as all men's "No."
How can it? O, how can Love's eye be true,
That is so vex'd with watching and with tears?
No marvel then, though I mistake my view;
The sun itself sees not till heaven clears.
O cunning Love! with tears thou keep'st me blind,
Lest eyes well-seeing thy foul faults should find.

Ignoring the bunch of malarky that's trying to pass for a reading of the sonnet toward the middle, there's something to the process of finding something about Shakespeare—about realizing that saying something in this way is different (and better?) than saying it in a straightforward, journalistic way.

The second scene of particular interest is our potential medical student's oral examination in Shakespeare. Take a gander:


"Othello had love, but he chose not to listen to his heart." Thus begins a series of flashbacks and realizations. It looks like she's blowing her chances of an A on the oral exam, but the articulate description of what true love must mean sways the sour-faced professors on the committee.

It's an interesting use of Shakespeare.  It's utterly cornball, of course, and completely unrealistic. But look at the power of Shakespeare to help us understand ourselves! I bet Harold Bloom would love this film.

The clip below contains those two scenes, but it also gives more context to the film's use of Shakespeare. Here are somethings to note as you watch it:

There you have it. It's a pretty bad film, but it does do some interesting things with Shakespeare. 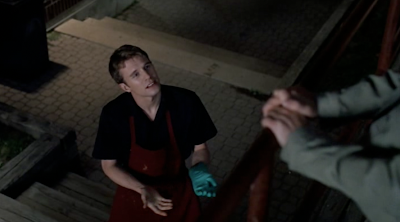 Bonus Image: Hinting at a Balcony Scene Encounter
Links: The Film at IMDB.