Romeo, Juliet, Lenny, and the Squigtones 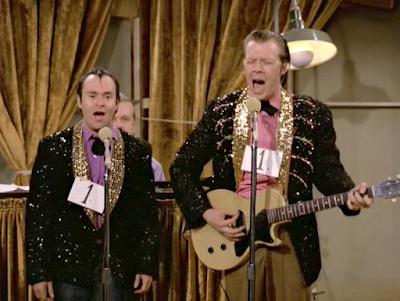 The quirky Lenny and Squiggy (who often accompany the almost equally quirky Laverne and Shirley) participate in an audition for the Shotz Brewery talent show.

The song they've put together is called "Star-Crossed." The lyrics later make the connection to Shakespeare's Romeo and Juliet explicit:


I live on the north side. She lives on the west.
The west is the worst side: the north is the best.
Her mudda's a drunk; her fadda's a punk.
But I know (yes, I know) that our love (yes, I know) could be real.

But I know (yes, I know) that someday (someday)
The Lord will look our way, and we'll be free.

That we're star-crossed.
We're like lollipops and caviar.
Star-crossed—so we'll drive up to the reservoir.

It may be a big tangential, but there's still some interest there. The narrative has more elements of West Side Story than Romeo and Juliet, and I'm curious about the socio-economic placement of the Juliet analogue.

It's also just quite a lot of fun. Observe:

You'll be happy to note that this was (for Lenny) just the beginning.  Lenny really did go on to make it big, changing his name from Leonard "Lenny" Kosnowski to David St. Hubbins when he joined Spinal Tap. 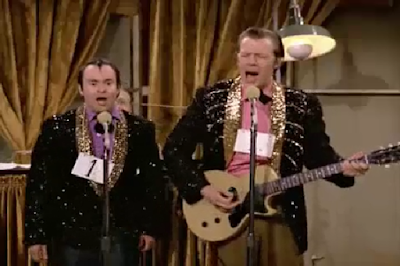 Star-Crossed!
Links: The Episode at IMDB.

Click below to purchase the entire run of the show from amazon.com
(and to support Bardfilm as you do so).