Book Note: William Shakespeare: Scenes from the Life of the World's Greatest Author 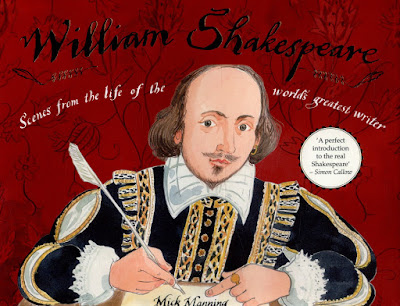 Manning, Mick, and Brita Granström. William Shakespeare: Scenes from the Life of the World's Greatest Author. London: Frances Lincoln Children's Books, 2015.
I chanced upon this book at my local library—and it just goes to show that a trip to the local library is very seldom wasted.

This recent children's book provides an invaluable survey of Shakespeare's biography in an engaging yet highly informative way. Not only do we glance at Shakespeare's history and culture, we get a number of very large spreads with careful (albeit brief) summaries of the plays.

I'm providing a couple of the spreads as examples. Click on them to engage them.

First, we have the "Lost Years." There's speculation here, but it's presented as speculation rather than fact. It seems a bit heavy on the "Shakeshaft" theory (see the sidebar in blue), but it does present a balanced position on that idea:

Second, here's a two-page spread on Henry V that gives us the plot of the play—together with some speeches and some audience annotation.

Finally, a small quibble (that is, I'm afraid, an uphill battle) with part of the text. In a section about Shakespeare's theatre (one that nicely re-tells the story of the parts of The Theatre being used to build The Globe), the book tells us that The Theatre—built in 1576—was "the first purpose-built theatre" in England. Although there's not absolute scholarly agreement on the subject, many scholars consider the Red Lion (in use from 1567) to be the first purpose-built theatre in England. But they do get the bear baiting (and good old Harry Hunks) right: 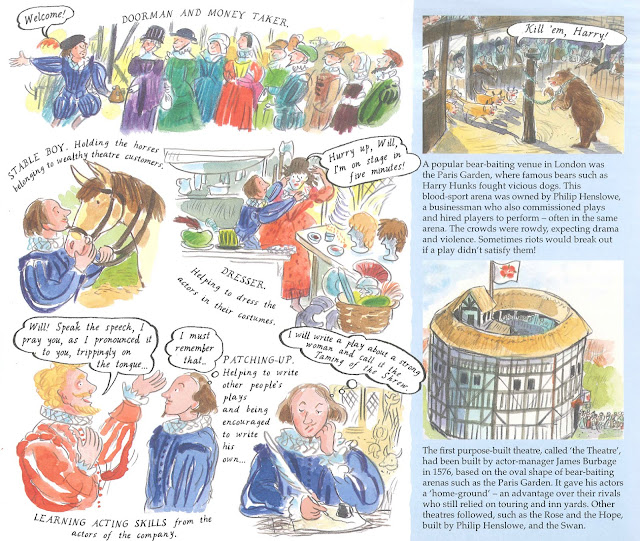 The books is pretty terrific, and I'm certainly going to add it to my library. I highly recommend it for libraries—public and private—as a tremendous introduction to Shakespeare's life, times, and works.