A Perfect Twelfth Night at the Great River Shakespeare Festival 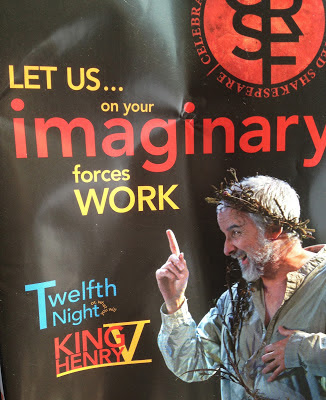 Friday's performance redeemed the play for me. I've had a checkered past with Twelfth Night. My first encounter with Twelfth Night was on a grade school field trip. I was amazed at how much spit the actors produced, how funny my classmates thought that was (I was more interested than amused), and how much energy the actors expended while leaping about singing "Hold Thy Peace." In short, I enjoyed it very much.

And then Trevor Nunn's 1996 film version of the play came along. The film was so dark, dreary, and depressing that it put me entirely off the play. After that, I taught the play a few times in introductory literature classes, but without much interest and with very little passion.

In short, any production of Twelfth Night had a very long way to go to convince me of the humor, significance, and value of the play. The Great River Shakespeare Festival's production tore up all my doubts and left them in the dust by the side of the road a thousand miles away.

The production avoids every trap into which it could have fallen. Its melancholy parts are poignant and deep, but they do not tip the balance of the play into despondency. The humorous parts are hysterically funny, but they never descend into pointlessness. Malvolio's imprisonment is treated seriously but not with sadistic cruelty, and his response is measured, not casting a pall over the reconciliations at the end of the play.

Moreover, every single role was cast and played perfectly. Secondarily, the music was carefully and thoughtfully integrated into the play as a whole. Sixth and lastly, the set was beautifully constructed. Thirdly, the choreography—particularly of the scene in which Malvolio finds the letter—was brilliantly conceived and flawlessly executed. And, to conclude, the Great River Shakespeare Festival has produced a perfect Twelfth Night.

I could go on for days about the magnificent details of this production, but I need to curb my enthusiasm and keep myself to mentioning just a few small points.

The production is set in Victorian England at Christmas time. The costumes are generally dark and somber, fitting the mourning and melancholy that are, in part, the play's concerns. That somber look is balanced by the music and revelry. The characters (particularly those affiliated with Sir Toby Belch) occasionally break into a rowdy wassail, perfectly complementing the play's more somber moments. The show also made incredible use of the folk song "The Water is Wide" throughout. It became a theme of separation and eventual reunion and reconciliation.

Jonathan Gillard Daly's Feste was simply superb. His singing voice and his acting are at the topmost level, but he casually and seemingly-effortlessly delivers Feste's witty lines and songs. They felt completely comfortable and sustaining. The music for Feste's songs was written for this production, and it was magnificent. Indeed, if I were absolutely forced to admit that this production had some flaw somewhere, I would very reluctantly say that having live music (as the Great River Shakespeare Festival did with its Comedy of Errors in 2010) rather than canned would give even greater flexibility and depth to the excellencies of the performance.

Daly's Feste is also one who knows much. When he exits in Act I, scene v, he gives Malvolio a prophetic glance as he says "the fool shall look to the madman" (I.v.137-38). He also starts saying "Sir" with great, incredulous emphasis during an early exchange with Viola-disguised-as-Cessario. This gave a great and pleasing wisdom to the fool.

I was completely floored by Christopher Gerson's Malvolio. He played the sour and demanding steward with empathy, bringing out his honest sense of duty to Olivia to balance his less-pleasing characteristics. And he played Malvolio's imagination—both before and after his discovery of the letter—so vividly that we saw his every thought. Peter Saccio, who has lectured on this scene and who will be speaking at the Great River Shakespeare Festival later this summer, will be immensely pleased at Gerson's rendition of the character.

Gerson also was able, in the scene where the letter instructs him to smile, to keep the audience in hysterical laughter for three full minutes without saying a word. The experience was unparalleled—although we laughed nearly as much when he re-entered in yellow stockings (and a costume likewise vibrant with yellow). The dark and somber costuming and set design would be worth it if it only served as a contrast to Malvolio's yellow outfit.

Sir Toby Belch (Michael Fitzpatrick) and Sir Andrew Aguecheek (Chris Mixon) formed an astonishing pair, particularly when joined by Fabian (Brian White) and Maria (Laura Jacobs). Their comic timing could not have been better. Especially (but not exclusively) in the trickery scene, they hit the laugh lines and actions absolutely right—particularly when Fitzpatrick, Mixon, and White had to disguise themselves suddenly as a nativity scene under the Christmas tree behind which they had been hiding. Genius.

Tarah Flanagan's Viola was moving and funny and touching and remarkable. She was able to convey the bifurcated nature of her position—wishing to serve Orsino in his wooing of Olivia while desiring his love for herself—in a deeply sympathetic way. She was also able to banter with Feste, critique (and compliment) Olivia, and react to the news that her brother was still alive in extraordinarily complex ways. Flanagan's versatility as an actor was able to bring out the versatility in the character in astounding ways.

Too many other marvelous things happened in this performance to list, let alone to detail. I wish I could say more about the role of The Caroler (played by Doug Scholz-Carlson), who, Chorus-like, introduced us to the background of the play and served a something of a foil to Feste; the distribution of Christmas ornaments during the curtain call—and Malvolio's reception of only a lump of coal; the slapstick surrounding the fight between Viola and Sir Andrew; the decisions Paul Barnes made as director; and the power Corey Allen brought to the role of Orsino. Instead, I must on your imaginary forces work to fill that in—or, better yet, you can see the show yourself.

I do admonish each of you to get to the Great River Shakespeare Festival this year to see a perfect Twelfth Night. Doescher, Ian. William Shakespeare's Star Wars: Verily, A New Hope. Philadelphia: Quirk Books, 2013.
I have nothing against Novelty Shakespeare—not even when it's connected to Star Wars. Indeed, I think I was the first person to give the world these gimmicky gems:

Alas, poor Yorick. I knew him, Obi-wan. Pah! And I thought he smelled bad on the outside!

Jedi have died from time to time, and worms have eaten them—but they always come back as shiny, shiny ghosts.

Luke, I am thy father's spirit, doomed for a certain term to walk the night.

Note: For others, see this post on Shakespeare Geek's blog.

Naturally, then, I was curious when I heard about a retelling of the plot of Star Wars: A New Hope entirely in iambic pentameter, and I was grateful when they sent me a copy. And the author of the book has clearly put a lot of thoughtful time into its creation. But, in all honesty, the book begin to pall pretty quickly. Good, strong lines lines like these (something of a silolquy by Darth Vader) . . .


And so another dies by my own hand,
This hand, which now encas’d in blackness is.
O that the fingers of this wretched hand
Had not the pain of suff’ring ever known.
But now my path is join’d unto the dark,
And wicked men—whose hands and fingers move
To crush their foes—are now my company.
So shall my fingers ever undertake
To do more evil, aye, and this—my hand—
Shall do the Emp’ror’s bidding ever more.
And thus we see how fingers presage death
And hands become the instruments of Fate. (I.ii.27-38)


LUKE: It seemeth that the Sand People have done
This wretched deed—yon gaffi sticks and tracks
Of bantha, aye. But ne’er in all my years
Have Tuskens gone awry so far as this.

OBI-WAN: And they have not, though they who this vile deed
Have done, would make us think Sand People did.
But hark! Take note, and look ye thereupon:
Yon tracks are side by side, yet Sand People,
’Tis known, e’er one behind the other ride,
So better may they hide their numbers large. (II.iv.1-10)

On the other hand, the publisher has put together this amusing trailer for the book:

The book is excellent in the genre of Novelty Shakespeare and will make a lovely gift for the Star Wars and / or Shakespeare fans in your life, but I'm not certain it will bear multiple readings.
Click below to purchase the book from amazon.com
(and to support Bardfilm as you do so).