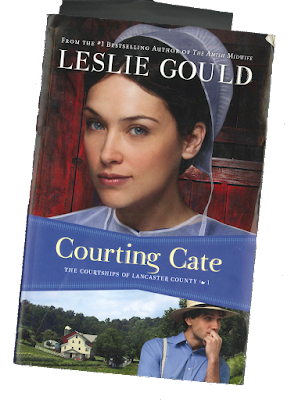 This genre isn't my cup of tea, so take that into consideration. And the publisher was very rude, picky, and stingy about supplying review copies, so put that in, too. Finally, consider that I've only read twenty-five percent of the books I have.

With a caveat like that, you can probably tell that I wasn't thrilled by this book. I'm intrigued by the idea, and the writing is competent, but I'm not convinced that we learn much about either the Amish or Shakespeare by reading this kind of book.

The one I read was Courting Cate. It's meant to be a retelling of The Taming of the Shrew, and it follows the plot roughly, and that's intriguing. But the way the characters are drawn and the way the plot is carried forward remains problematic. For example, Cate's shrewishness seems to be embodied merely in reading too much, being a bit standoffish to some cousins who teased her when she was young, and burning biscuits.

I'm also not convinced by the romantic developments in the novel. Cate has to marry before her younger sister can marry (as in Shakespeare's play). Cate finds out that her cousins are paying Pete to court her (as in 10 Things I Hate About You). Our Katherine analogue enters into a marriage of convenience with our Petruchio analogue (Pete) because her sister is pregnant; if her sister doesn't get married (and fast), it will bring shame to her Dat, who has raised them both since their mother died a few days after her sister's birth. Cate then moves away to live with her in-laws, who are rude and mean (mostly). When she comes back home for her sister's wedding, she sees that her sister isn't pregnant after all. It turns out her sister never did anything that would cause her to get pregnant, but she didn't read the books Cate gave her to read on the subject, so she thought she was pregnant when she wasn't.

Fortunately, Cate's fallen in love with Pete by then—his sleeping on the floor in a sleeping bag and working hard at her in-laws gradually caused her to fall for him—so everything works out all right. But that plot device seemed a bit cheap and frustrating.

But the writing isn't terrible, and there's some character development that makes sense—so I'm a bit torn. Of course, the writing does occasionally head toward the ridiculous, as in this example:

It wasn't my father; it was Pete. My heart fluttered at the sight of him. He smelled fresh, like the cold spring air mixed with the scent of goat's milk soap, and wore a clean shirt and nicer pants than the ones he'd had on the other times I'd seen him, but they weren't anywhere close to new. (67)


When the couple went to New York City and overheard some actors saying, "Kiss me, Kate," I had hopes for some metafictional contemplation of the way Shakespeare's story matched that of the couple in the novel—but we're left to do that on our own. Still, there's something self-aware in the passage: 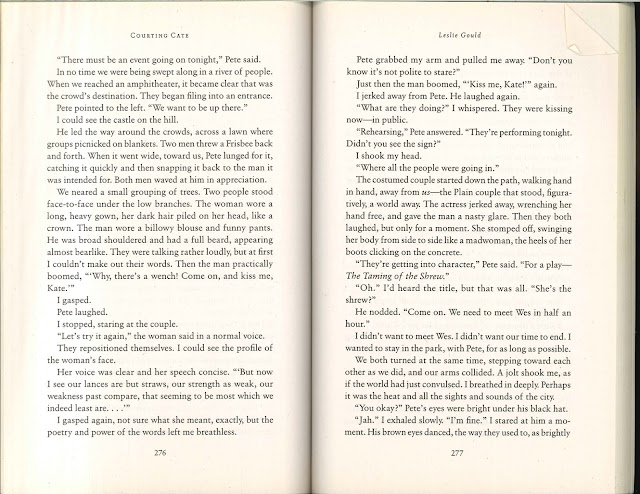 On the next page, we get something that could be developed much more fully—but it's a nice start:

And the idea of finding something of our stories in Shakespeare's is caught up toward the end of the book as well. Here, things are starting to work out—but there's still some room to go: 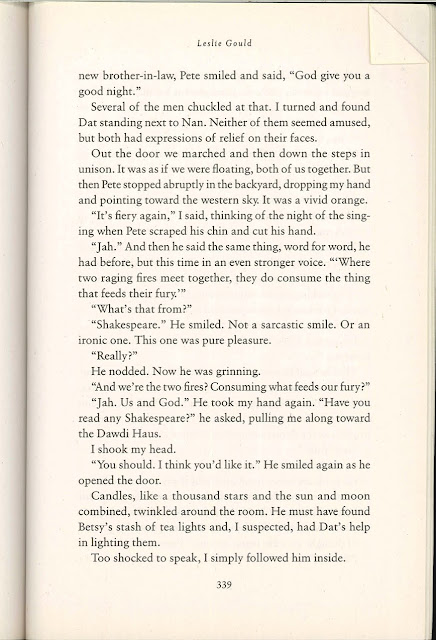 For a character whose "shrewishness" is defined by her excessive reading and excessive trips to the bookmobile, it's surprising that she's never read any Shakespeare—but what would she have done if she had?

If the idea of Amish Shakespeare fiction sounds good to you, try it—and the three others Leslie Gould as written. The writing is good, and they're fairly well-crafted. And they play with the plots of Romeo and Juliet (Adoring Addie), Midsummer Night's Dream (Minding Molly), and Much Ado About Nothing (Becoming Bea). 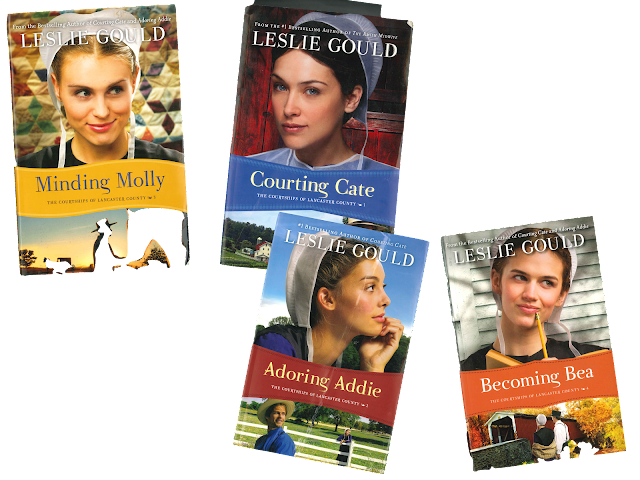 Click below to purchase one—or more!—of the books from amazon.com
(and to support Bardfilm as you do so).