Woody Allen Plays the Fool. No, Really. The Fool in King Lear. 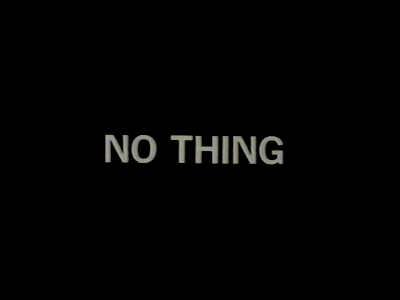 Actually, I suppose that I've exaggerated the inevitably of the height of the expectations. My expectations were fairly meager. I wanted to see Woody Allen as the Fool and to see Peter Sellers clowning it up a bit. I had to wade though almost the entire film before Woody Allen showed up, and I quickly learned that William Shaksper Junior the Fifth was played by Peter Sellars, not Peter Sellers.

The film is an Avant-garde derivative of King Lear, and it's not without its merits. The general idea is that the world has fallen apart, but William Shaksper Junior the Fifth is gathering bits and pieces of King Lear in an attempt to restore it—and, presumably, though it, the art, literature, and humanity of the ages.

With that as a premise (and with Jean-Luc Godard as a director), the play is necessarily fragmented. It wasn't an enjoyable film to watch, but the idea behind it is intriguing. I got the feeling of being T. S. Eliot's Fisher King, constantly hearing the line "These fragments I have shored against my ruins" (The Waste Land 431) running through my head.

That isn't to say that I did not also think "Why then Ile fit you" (The Waste Land 432) from time to time, exasperated at the way the idea was playing itself out and plotting my revenge.

Still, Woody Allen! The Fool! Sort of!
So that you don't have to roll up your cuffs and make your way through the opening hour or so, here's the big payoff:
Links: The Film at IMDB.

Something about Margaret: Branagh's Solution in Much Ado about Nothing 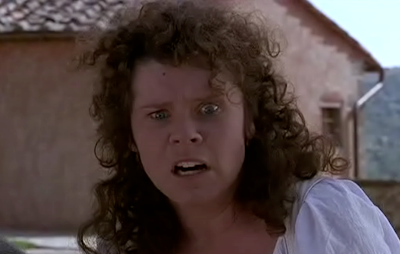 Much Ado about Nothing. Dir. Kenneth Branagh. Perf. Kenneth Branagh, Emma Thompson, Denzel Washington, Michael Keaton and Keanu Reeves. 1993. DVD. MGM, 2003.
Branagh's decisions about how to play Much Ado About Nothing's Margaret are, on the whole, objectionable. So is Michael Keaton's Dogberry, but that's another story. Leaving Margaret and Dogberry aside, the film is one of the best modern Shakespeare films available. What does Branagh do with Margaret's character that is so objectionable? And, having done that, does Branagh redeem his decisions in any way?

First, Branagh uses a visually-presented liaison between Borachio and Margaret as ocular proof for Claudio that Hero is unfaithful. In doing so, he deviates from the text. Borachio describes the encounter this way:


I have to-night wooed Margaret, the Lady Hero's gentlewoman, by the name of Hero: she leans me out at her mistress' chamber-window, bids me a thousand times good night . . . . (III.iii.145-48ff)

There's nothing in that account that looks like Branagh's presentation of the encounter. Bardfilm readers will know that I don't usually object to modernizations or to deviations from the text of a given Shakespeare play. Such deviations can be intensely interesting and entertaining, and they can bring different facets of the text to light. But this one goes too far in attempting to justify Claudio's later actions. The play's ending is more significant when Claudio is a bigger idiot. It gives Hero much more credit throughout the rest of the play when her actions are untempered by what might be more reasonable suspicions on Claudio's part.

We also wonder about Margaret more the more she looks blameworthy. Questions about Margaret's silence often occur to readers of the play and (slightly less often) to viewers of productions of the play. Margaret is one of the gentlewomen attending on Hero, and she is presumably around after the news of Claudio's behavior at the wedding gets out. Why doesn't she speak? Surely, she could say a quick "Erm . . . I was the one speaking out of the window that night" and set things right before they get out of hand.

In the text, Margaret doesn't re-enter until V.ii, after the news of Don John's plot has reached the ears of those most concerned in it. In Branagh's version, she's present at the wedding—and would, we might think, be more inclined to interrupt the proceedings. But in having her present, Branagh redeems (somewhat) his decisions about her character, developing some unexpected depths to Margaret as he does so.

During Claudio's accusations, the camera frequently cuts to Margaret to view her reactions (the image above is one such instance). She's perplexed and horrified, but she's not quite ready to speak out—perhaps out of guilt or shame or embarrassment or some combination of all of those. What she is ready to do is to go find Borachio and demand some explanations from him. At least, that's the impression I get as she looks around at the crowd and then dashes out, trying to get ahead of all the other exiting guests.

Had she been able to find Borachio, Margaret might have come back to make a report to Leonato. But (and here's the part that seems most realistically motivated) Borachio has been arrested by this time, and Margaret, unable to find him, can produce neither an explanation nor any proofs for her claim. That really is a convincing reason for her not to speak.

But we do lose something (a good deal, in fact) of the virtue of Margaret in having her so visually complicit in Don John's plot. Borachio's words about her behavior simply don't apply in the Branagh version. When Leonato declares his belief that Margaret "was pack'd in all this wrong, / Hired to it by your brother" (V.i.299-300), Borachio makes this reply:

If that is so, Borachio is not a very keen observer (if the Branagh presentation is foremost in our minds). If we follow the text, Borachio's lines make more sense—though Margaret may still be considered somewhat culpable in allowing herself to be wooed under the name of Hero and for not speaking up as quickly as she might have done.
Links: The Film at IMDB. 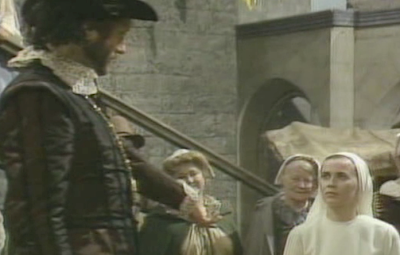