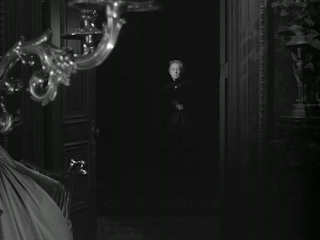 "Banquo's Chair." By Francis M. Cockrell. Perf. Alfred Hitchcock, John Williams, Hilda Plowright, Max Adrian, George Dillon, Tom Dillon, Reginald Gardiner, Kenneth Haigh, and George Pelling. Dir. Alfred Hitchcock. Alfred Hitchcock Presents. Season 4, episode 29. NBC. 3 May 1959. DVD. Universal Studios, 2009.
Occasionally, I reward myself for finishing a particularly difficult bit of writing or a peculiarly large stack of grading by posting to Bardfilm. As you may be able to tell from the length between this post and the last one, I've had a fair bit of both kinds of work, and that's kept me from posting.

And that's unfortunate because, some time ago, I happened upon a marvelous episode of Alfred Hitchcock Presents that employs a trope from Macbeth for Hamletesque results, and I've desired to post about it ever since.  In this episode, a retired detective wants to crack a two-year-old unsolved case, and he resolves to go about it with—perhaps consciously, perhaps unconsciously—Hamlet’s idea in mind:


I have heard
That guilty creatures sitting at a play
Have by the very cunning of the scene
Been struck so to the soul that presently
They have proclaim'd their malefactions.  (II.ii.588-93)

Most interestingly, he decides to use a device from Macbeth—the appearance of the ghost of Banquo—to trap the man he suspects of murdering his aunt. He invites the suspect to the aunt's old home, convinces the house's new owner to host a dinner party to which he brings a Shakespearean actor (which allows for some of the dinner conversation to turn, notably, to Hamlet) and the murder suspect. He also hires an actress to impersonate the suspect's aunt.

I've reduced the show to its absolute essentials in the clip below—minus any sort of thrilling twist that Hitchcock may or may not have provided at the show's end (no spoilers).  Enjoy!


Now that you've seen that, you may be wondering what happens next. The following clip is most certainly a spoiler, so do not watch it if you want to watch the entire episode yourself at some point. Additionally, see if you can anticipate any sort of Hitchcockian twist that might be coming.

Links: The Episode at the Alfred Hitchcock Wiki.