Book Note: Her Infinite Variety: Stories of Shakespeare and the Women he Loved 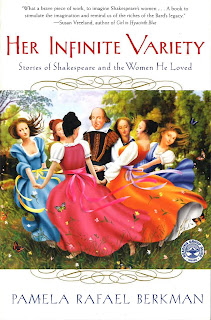 Berkman, Pamela Rafael. Her Infinite Variety: Stories of Shakespeare and the Women he Loved. New York: Scribner Paperback Fiction, 2001.This is one of those books that hung around for a while until I felt guilty enough to read it. It's a collection of imaginative short stories about the women in Shakespeare's life—Anne, Judith, the Dark Lady, et cetera. And it includes short stories about the fictional women in Shakespeare's life—Ophelia, Titania, and others.
The stories vary quite a bit. Some are remarkably tedious while others have sparks of genuine interest.
I gravitated toward the stories about characters. For example, here's Titania's story, in which we learn that her fairy powers and her hatred of the "falling in love with a donkey" plot point combine to bring a very particular curse on Shakespeare's head: 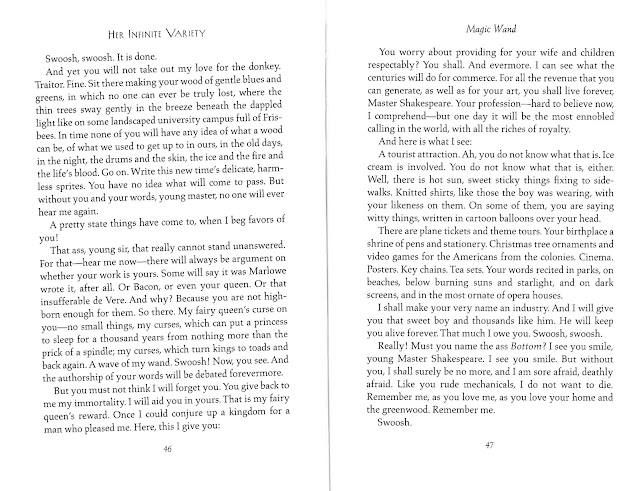 The Ophelia story also has some interest: 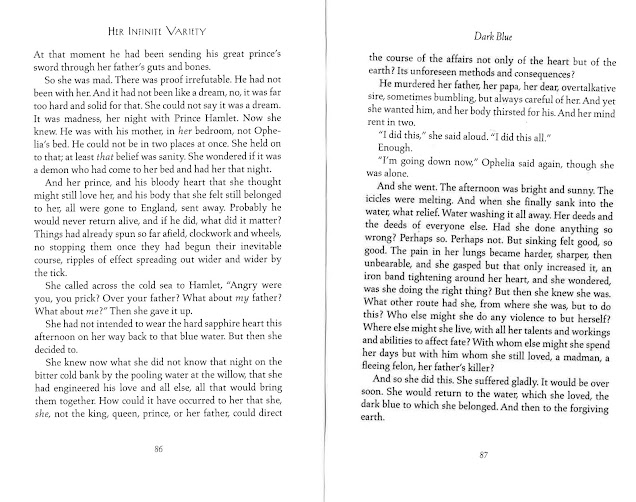 There you have it. Some points of interest are to be found here, but the volume won't become a mainstay in my Modern Shakespearean Fiction class.
Click below to purchase the Book from amazon.com
(and to support Bardfilm as you do so). 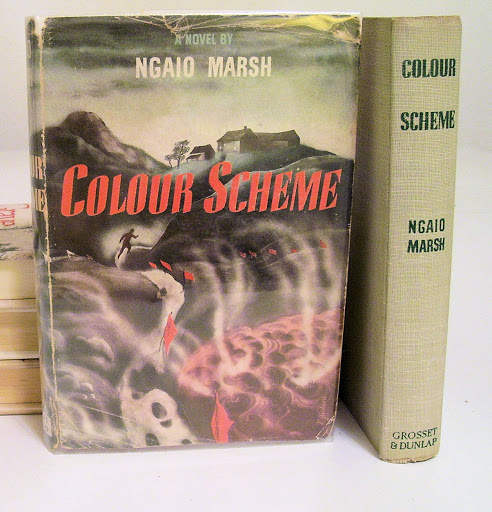 Marsh, Ngaio. Color Scheme. New York: Felony & Mayhem Press, 1971.I've been trying to read through the complete works of Ngaio Marsh in chronological order, and it's a fun project. Here at Bardfilm, you may have encountered Death at the Dolphin (for which, q.v.) and / or Light Thickens (for which, q.v.). Those are both novels set around specific Shakespeare or Shakespeare-related productions.
But, as with Agatha Christie and Dorothy L. Sayers, Shakespeare allusions or Shakespearean actors are never very far out of the picture.
In Color Scheme, a 1943 novel set in New Zealand, a retired (but not retiring—see what I did there?) Shakespearean actor goes to a hot springs resort to attempt to cure his gammy leg. While there, he (naturally) speaks some speeches trippingly on the tongue. One of the first of these is the Agincourt speech—in this case, spoken to impress a female admirer at the springs.
The Henry V is important (a key plot point hinges on it—but there's a mistake there somewhere), so stick around. But I want to give you that first scene nearly in full—the characters have a wide-ranging discussion about Shakespeare (it starts about halfway down page 135 below): 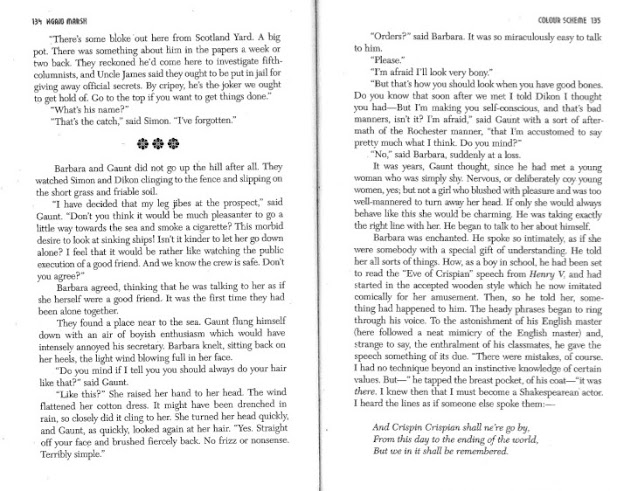 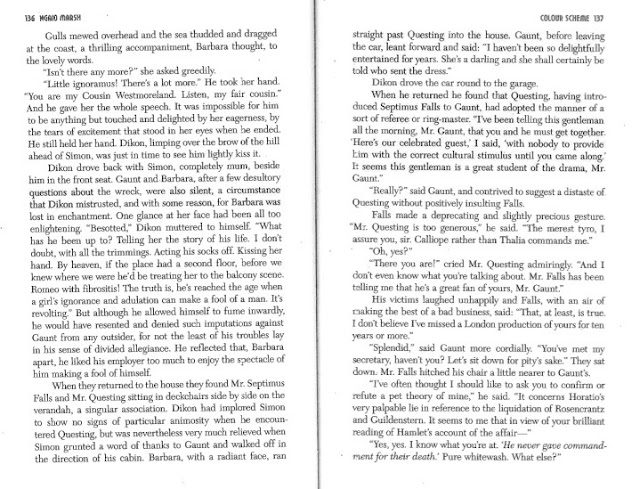 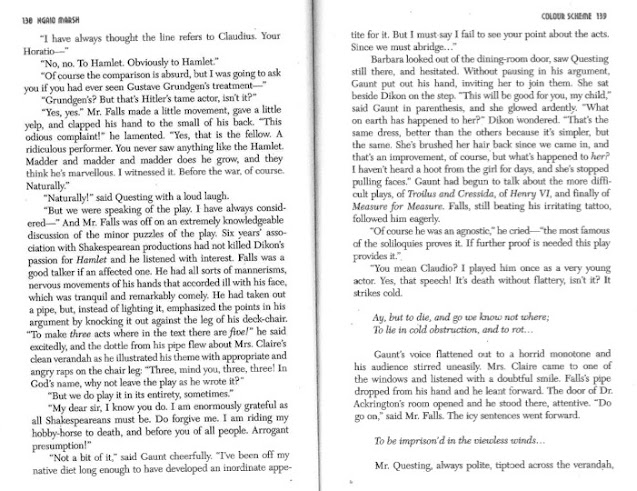 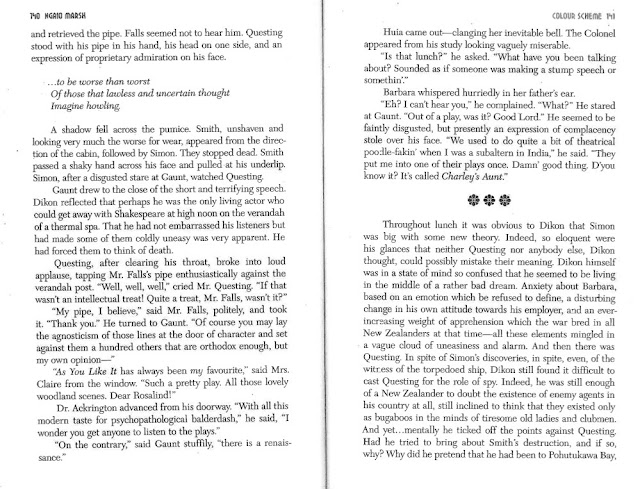 All very interesting and good—particularly the line about Charley's Aunt to close the scene.
But then there's a murder. And the alibi of one of the suspects depends on when he was at a performance of "Speeches from Shakespeare" delivered by our retired actor friend Gaunt. Here's how that gets set up (page 260): 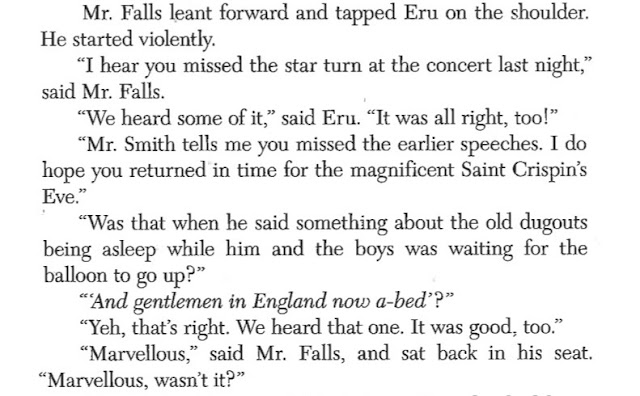 So they got back in time to hear the part early on in the performance where Gaunt delivers the St. Crispin's Day speech. And, as something of a side note, if you check OED definition B.3 for "dugout, adj. and n.," you get this: "3. A person of out-dated appearance or ideas; spec. a superannuated officer, etc., recalled for temporary military service. slang." Very good. But then we get this on page 289: 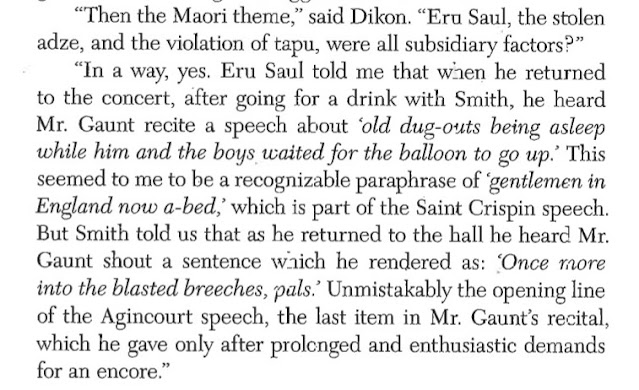 I believe the popular expression is "Wait . . . what?"
The time difference between the two speeches is clearly important, as we learn on page 290:

But there it is again. It suggests a difference between the Agincourt speech and the Crispin speech. But those are the same speech! "Once more into the blasted breeches, pals" comes from what is often called "The Speech Before Harfleur," which comes much earlier in the play but six minutes later in the performance of Shakespeare speeches.
It's clear what they mean, and it doesn't really make any difference to the alibi. But I wonder how the mistake made its way into the final version of the novel—if this is the final version of the novel. I was reading from a 1971 edition. My next step will be to try to track down an earlier and a later printing to see if it's just this edition that got them mixed up or if they were mixed up from the get-go.
Click below to purchase the book from amazon.com
(and to support Bardfilm as you do so).