Shakespearean-Sounding Language in Mork and Mindy 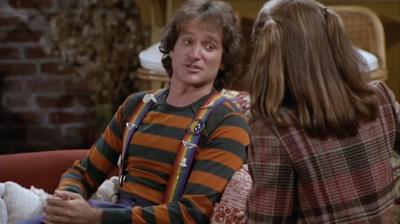 "Pilot." By Garry Marshall. Perf. Robin Williams and Pam Dawber. Dir. Howard Storm. Mork and Mindy. Season 1, episode 1. ABC. 14 September 1978. Ah, some more sitcom Shakespeare!
I'm teaching a course called "Literature of Humor," and I dipped into the late 1970s show Mork and Mindy, starting (in particular) Robin Williams. Our textbook for the course starts off by talking about the defamiliarization aspect of humor, and Mork and Mindy is about an alien who comes to Earth to research our quaint Earth customs. I thought I might find a brief example to illustrate that principle. In addition to that, I found a bit of Shakespearean language.
Williams often incorporated pseudo-Shakespeare into his stand-up routines, so I shouldn't have been surprised to find that in Mork and Mindy. Here, then, is the brief clip. Enjoy!

Mindy: Now, Mork, that’s what got you the trouble the last time!

Mork: Alas, my lady, you do deal me pain. ’Tis justified, and I shall repent.
Mindy: Oh come on . . . Hey! Where did you get that voice?
Mork: From yon video. ’Twas Shakespeare methinks, or ’twas The Jeffersons.
Mindy: Well that . . . that voice is normal—if you forget the ’twas and the ’twits.
Mork: I’ll ’twy!