Hamlet with Vegetables (a.k.a. The VeggieTales Hamlet) 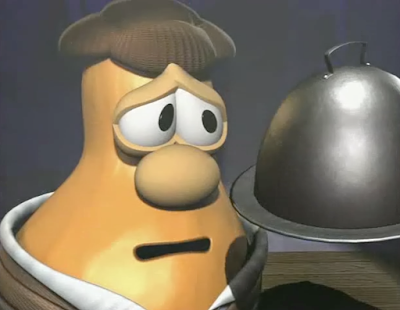 "Omelet." By Phil Fischer. Perf. Jimmy Gourd; Archibald Asparagus; Phillipe and Jean-Claude, The French Peas; Scooter Carrot; Mr. Lunt; Larry; and Junior Asparagus. Additional Perf. Mike Nawrocki, Lisa Vischer, Jim Poole. Lyle the Kindly Viking. VeggieTales. 2001. DVD. Big Idea, 2012.
Recently, I noticed a gap in the blog. I've frequently shown a brief segment of a VeggieTales episode during my "Mystery Shakespearean Derivative" day in my Shakespeare and Film class. I teach at a small Christian liberal arts college, and many of my students grew up on the show. They appreciate taking a new look at the show—and at Hamlet at the same time.

I thought I had written about the episode here, but I have never done so. Perhaps that's because I like to keep the Mysterious Shakespearean Derivatives a mystery. But I'll take the chance.

In Lyle, the Kindly Viking, Archibald Asparagus (who is usually a bit snooty anyway) is attempting to raise the tone of the show by incorporating thing with greater cultural value. Thus, Hamlet. There are some fairly-good adaptations of lines from the play to recognize.

Here's part of the segment (in keeping with Bardfilm's Fair Use Policy, I'm not providing the clip in its entirety). Enjoy!

I like to think that the last two lines indicate a desire on the part of the characters to explore Shakespeare's play itself rather than this adaptation. Either way, they are funny.
Links: The Wikipedia Article on the Episode.