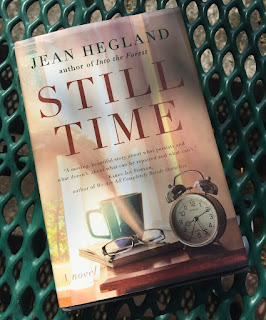 You may have noticed that Shakespeare Geek has provided a good review of this book. I just want to add a bit to it and do what I can to increase the novel's visibility.

Still Time isn't a derivative version of any Shakespeare play, but it contains multitudes. The main character is a retired Shakespeare scholar who has recently been admitted to a nursing home. He's suffering from Alzheimer's disease or dementia. He struggles to remember his daughter, and he keeps insisting that he's meant to be heading home before nightfall. He recalls bits of his career from time to time—and bits of Shakespeare. Those seem to stick deeper than some other elements, but even those are occasionally hard to grasp for him.

As you can imagine, that's a tough story to tell. What impressed me most was the deep and convincing way in which the story is told. This isn't a tearjerker—though it's likely to make you cry. This isn't a simple narrative—though it's clear. This isn't a story about recovery from loss—though it provides thoughts on that subject.

I also felt like I might be reading my future in the novel. That makes it harder, of course, but it also makes it genuine.

I often talk to my students about writing with depth and significance. This complicated novel provides just that—without providing an easy moral at the end.
Click below to purchase the film from amazon.com
(and to support Bardfilm as you do so).