Subtle Shakespeare in Star Trek II: The Wrath of Kahn 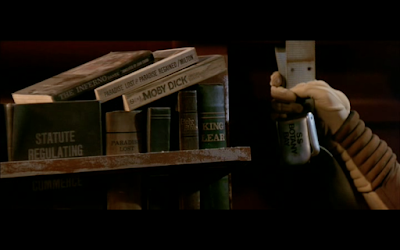 Star Trek II: The Wrath of Kahn. Dir. Nicholas Meyer. Perf. William Shatner, Leonard Nimoy, DeForest Kelley, Nichelle Nichols, James Doohan, George Takei, Walter Koenig, and Ricardo Montalbán.  1982. DVD. Paramount, 2009.
Star Trek II: The Wrath of Kahn never made it to my post "Shakespeare and Star Trek Complete" (for which, q.v.)—perhaps because the reference was visual rather than auditory or perhaps because the references to Moby Dick and Paradise Lost overshadow it.

Today is the anniversary of the 1851 publication of the English edition of Moby-Dick (titled The Whale). And plenteous references to Melville's novel can be found in the Star Trek universe. But I'm always interested in the Shakespeare.

The Shakespeare in Wrath of Kahn is found in the image above. Among the expected volumes—Inferno, Paradise Lost / Paradise Regained (in one convenient volume), Moby Dick, Paradise Lost (in one large volume) the Bible, and Statute Regulating [the Something Something], we find King Lear.

The film itself doesn't offer much in the way of plot elements drawn from King Lear—the vengeful hunt by Kahn for the white whale of Kirk is uppermost.  But imagine what great quotes Kahn could have hurled at Kirk had he spent more time with that volume of King Lear and less with Moby-Dick:


The bow is bent and drawn, Kirk!

Now, Kirk, stand up for bastards! [Would Kahn have known about Kirk's illegitimate son?]

These late eclipses in the sun and moon portend no good to us.

I will have such revenges on you, Kirk,
That all the world shall . . . I will do such things—
What they are, yet I know not: but they shall be
The terrors of the earth!

For best effect, read all of those in Ricardo Montalbán's unique accent.
Links: The Film at IMDB.