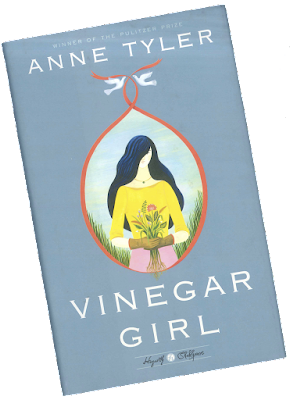 Tyler, Anne. Vinegar Girl: The Taming of the Shrew Retold. London: Hogarth Shakespeare, 2016.
My criteria for a novel that retells the plot of a Shakespeare play include (1) its ability to tell us something about the play that we hadn't noticed, seen, or thought deeply about and (2) its status as a novel in its own right.

When the Hogarth Shakespeare Series was announced, I was expectedly thrilled. When great novelists take on Shakespeare plays, the result will surely be excellent, inventive, inspiring. It will also be useful in my Modern Shakespearean Fiction class.

The Gap of Time was the first, but it proved to be pretty disappointing (for which, q.v.).

And I'm afraid I have to say something of the same for Anne Tyler's Vinegar Girl. I had even high expectations for this, having enjoyed some of Tyler's novels in the past. And I did start to enjoy it and find some depth in it after about a hundred pages.

The plot involves a scientist father who is largely absent, a daughter whose shrewishness is largely a tell-it-like-it-is attitude, a much younger sister who is falling for her high school Spanish tutor, and a lab assistant from Russia whose visa is about to expire and who therefore needs to marry an American as soon as possible.

I appreciate the inventiveness of that last plot element. Perhaps it helps to explain why a woman would marry a man quickly while still not particularly caring for him. The sample below gives a taste of that part of the relationship: 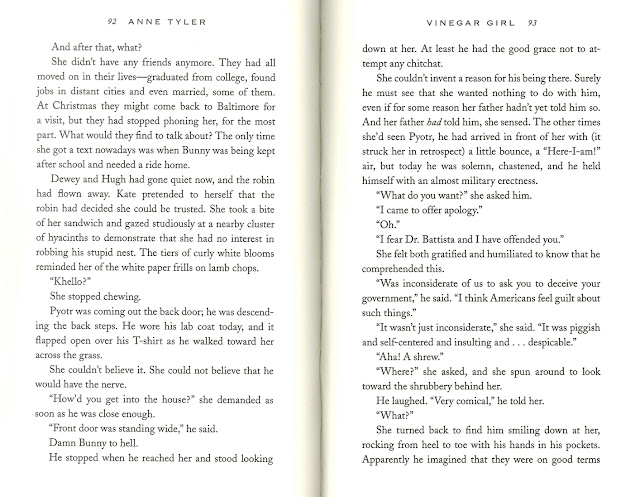 The one part of the novel that called our attention back to the play itself for realization, reconsideration, and reflection comes at the very end of the novel. Note: This is something of a spoiler. Here's how things wrap up: 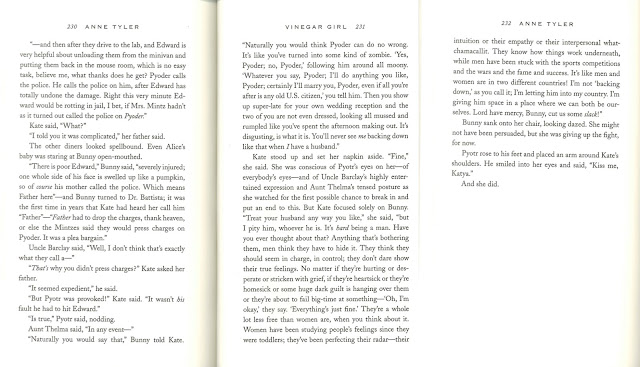 Overall, the novel doesn't fit my criteria. But the attempted translation of Katherine's "I am ashamed that women are so simple" speech does have considerable interest in it—enough to provoke some good discussion both of it and of Shakespeare's original.

So let's start some! What's your impression of Anne Tyler's version of the speech? Is it a fair modernized version of the speech? Does it radicalize the speech or return it to largely-conservative territory? Give us your thoughts in the comments below.
Click below to purchase the book from amazon.com
(and to support Bardfilm as you do so).