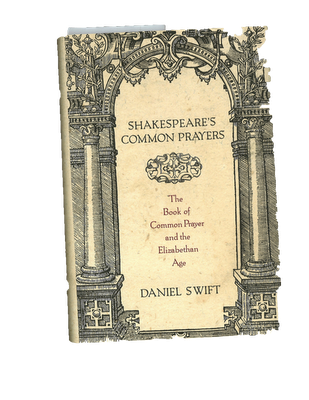 Swift, Daniel. Shakespeare's Common Prayers: The Book of Common Prayer and the Elizabethan Age. Oxford: Oxford University Press, 2013.
I have only just started reading this book, but I am already finding it very difficult to put down.

Daniel Swift tells a story that has too long gone untold. He traces the history of the first several editions of the Book of Common Prayer—the pervasive, omnipresent sounds of it ringing, in its various versions, all around England, starting in 1549 and continuing (with a brief break for the 1553-1558 reign of Mary) through the life of Shakespeare and well beyond.

Swift's claims are quite far-reaching, but they are not hyperbolic:


In England for almost one hundred years between the issue of its first edition on 7 March 1549 and the government decree of 4 January 1645 that made its use illegal, the most influential literary work was the Book of Common Prayer. These dates are a neatly bracketed but wide-open window, and they include the whole reign of Elizabeth I and of James I; the lifetime of Shakespeare, John Donne, Ben Jonson, Philip Sidney, and Christopher Marlowe; and the composers William Byrd and Thomas Morley. (31)

The careful research and argumentation of the volume are impressive, and the connection between liturgy and drama is completely fascinating. This is a work of deep, thorough scholarship—but do not by any means imagine that that means that it reads like a lump of sawdust.  The book is extremely interesting and well-written.  It's a model of a modern scholarly book.