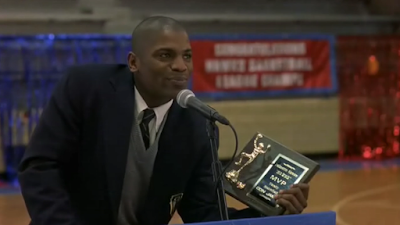 O. Dir. Tim Blake Nelson. Perf. Mekhi Phifer, Josh Hartnett, Andrew Keegan, Julia Stiles, and Rain Phoenix. 2001. DVD. Lions Gate, 2002.
I've never been greatly enamored of O, even though Julia Stiles is in it. It seemed to be one of many in the "Shakespeare set in high school" genre, and, even though it captures the way emotions run high in high school, it didn't seem very realistic.

Still, the opening is exciting, and it does set the clear black / white dichotomy that the film is looking to develop. Take a look!


I think the opening is the best part. I'm not convinced by O's Roderigo—or by much else in the film.

Anyone want to weigh in in the comments on what I ought to realize or recognize about this Shakespeare derivitive?
Links: The Film at IMDB.