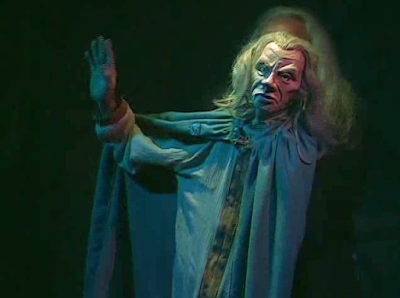 Back in 2009, a group of actors put on a production of The Tempest using puppets.

I found the show very compelling.  The image above is of the Propero puppet, but you can make out the performer carrying it. At strategic moments throughout the film, he puts the puppet aside to carry on acting on his own—but he's the only one (as far as I noticed) to do so.

I'm providing two scenes for you to get the feel of the production. Here's a good segment of Miranda and Prospero talking at the beginning; it segues into an exchange between Ariel and Prospero:

And here's the entirety of Act II, scene ii—where Caliban takes cover and Stephano and  Trinculo try to join him. It's played for humor, but the language is still given a great deal of priority:

The film version of the stage production is exceedingly enjoyable. It works for the Shakespeare scholar, but I think it would also work for introducing neophytes to the play.
Links: The Film at the Independent Eye.

Click below to purchase the film from the Independent Eye.