Elizabeth: The Golden Age. Dir. Shekhar Kapur. Perf. Cate Blanchett and Geoffrey Rush. 2007. DVD. Universal Studios, 2008.
Elizabeth: The Golden Age answers the golden, age-old question of what would happen if you took a thrilling narrative, an immense budget, a number of top-notch actors and actresses, a lush soundtrack, and beautiful cinematography and tried to make it as bone-wearyingly boring as you possibly can.

We at Bardfilm try to be as positive as possible in our reviews. But this film is unforgivably dull.

That's particularly the case because it has so much working in its favor! How can the threat of the Spanish Armada possibly be made tedious? The history on which this is based is unbelievably interesting, but this film is dry as dust. And please note that I don't demand absolute historical accuracy in dramatic retellings of historical events—if I did, I wouldn't be able to enjoy any one of Shakespeare's ten history plays. But this film takes the exciting, non-stop drama of this part of Elizabeth's reign and slogs though it at a sloth's pace. It's ridiculously uninspiring.

The clip below shows one way they take the excitement of actual history and empty it of anything even mildly interesting. They take Elizabeth the First's great speech at Tilbury—it's the monarchical equivalent of Shakespeare's Henry V's speech before Agincourt—and re-write it so that it has none of the fire and splendor of the original:


What a mess. The soldiers aren't cheering at what she says; they're simply cheering because they think that she's done talking absolute drivel. Here's what Elizabeth the First actually said, on August 8, 1588, to the troops at Tilbury as they gathered to face the overwhelming force of the invading Spanish fleet:


My loving people . . . I am come amongst you, as you see, at this time, not for my recreation and disport, but being resolved in the midst and heat of the battle, to live or die amongst you all, to lay down for my God and for my kingdom, and for my people, my honour, and my blood, even in the dust. I know I have the body but of a weak and feeble woman, but I have the heart and stomach of a king, and of a King of England, too. (Somerset 464)

For dramatic effect, that has been pared down slightly from the complete speech (which I print in full below)—and I have no doubt that, had Cate Blanchett been allowed to deliver those lines instead of the mindless schlock they gave her to say, the film would have benefited immeasurably.

Let Blanchett speak these lines—or just give her the St. Crispian's Day speech! Either would be inexpressibly superior to the lines they actually gave her.
Here, to provide the complete historical record, is the speech in its entirety:


My loving people. We have been persuaded by some that are careful of our safety, to take heed how we commit ourself to armed multitudes for fear of treachery; but I assure you, I do not desire to live to distrust my faithful and loving people. Let tyrants fear. I have always so behaved my self, that under God, I have placed my chiefest strength and safeguard in the loyal hearts and goodwill of all my subjects, and therefore I am come amongst you, as you see, at this time, not for my recreation and disport, but being resolved in the midst and heat of the battle, to live or die amongst you all, to lay down for my God and for my kingdom, and for my people, my honour, and my blood, even in the dust. I know I have the body but of a weak and feeble woman, but I have the heart and stomach of a king, and of a King of England, too, and think foul scorn that Parma or Spain, or any Prince of Europe should dare to invade the borders of my realm; to which, rather than any dishonour shall grow by me, I myself will take up arms, I myself will be your general, judge and rewarder of every one of your virtues in the field. I know already for your forwardness, you have deserved rewards and crowns; and we do assure you, in the word of a Prince, they shall be duly paid you. (Somerset 464)

The Private Lives of Elizabeth and Essex—and of Shakespeare 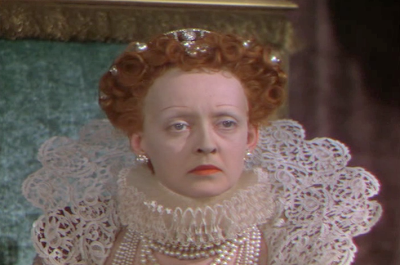 The Private Lives of Elizabeth and Essex. Dir. Michael Curtiz. Perf. Bette Davis, Errol Flynn, Vincent Price, Donald Crisp, Alan Hale, and Olivia de Havilland. 1939. DVD. Warner Home Video, 2005.
I watched this film some time ago, more as a curiosity about how the times of Shakespeare were portrayed in film in the 1930s than anything else. I found it to be wonderful and terrible in equal measure. I chose the three clips below to illustrate that.

Bette Davis plays Queen Elizabeth with power and grandeur. But the Elizabeth she is asked to portray—at least in the romantic, behind-the-scenes scenes with Essex—is sappily and ridiculously (not to mention unhistorically) romantic. Errol Flynn is good as Essex—he's lovely at flying into rages. But the romantic side of him is sentimental rather than swashbuckling.

The Queen's entrance is nicely done: though it's not meticulous about period furnishings, costumes, or attitudes, it provides a sense of grandeur to the royal personage.

The film also provides an interesting twist on the story of Queen Elizabeth's reaction to a performance of Richard II. In 1601, Shakespeare's company was paid to put on a production of Richard II the day before a failed insurrection. The play addresses the successful deposition of an unpopular monarch, and the theory is that the leaders of the insurrection (the Earl of Essex and his crowd) thought that the play would rally the people to their cause—or, at least, give them courage to go through with a dangerous and deadly—and, for Essex and many others, fatal—operation. Afterwards, in extreme pique, Her Majesty purportedly said, "I am Richard—know ye not that?"

In this clip. Her Majesty is much more laid-back about the situation, chiding Lord Burghley, one of her advisors, for censoring "Master Shakespeare and his players without consulting me."


Finally, yes, that is Vincent Price, lurking in the background, playing Sir Walter Raleigh, looking guilty at having intercepted the letters Elizabeth and Essex wrote each other during Essex's Irish campaign. I knew you'd recognize him!
Links: The Film at IMDB.

Inspector Lewis and The Merchant of Venice

Bardfilm circumvents that difficulty by, in this instance at least, being merely informative! An episode of Inspector Lewis is set among a small theatre troupe putting on The Merchant of Venice. Would anyone care to speculate on the murder weapon? In any case, the episode itself is well done (although the themes of the Shakespeare play aren't integrated into the show itself to any great degree). Here's the opening sequence, which shows the director being perhaps a bit too harsh on the actors. Enjoy!


Click below to purchase the first and second series from amazon.com
(and to support Bardfilm as you do so).