“Episode 13.” By John Aylesworth, Frank Peppiatt, Buck Owens, Roy Clark, et al. Perf. Buck Owens, Lulu Roman, and Junior Samples (et a whole lot of other al., but those are the ones in the clip below). Dir. Bill Davis. Hee Haw. Season 1, episode 13. CBS. 17 December 1969. DVD. Time Life, 2015.You may be asking why I, a Shakespeare and film blogger of some repute (no, I didn't say what kind of repute) and a Shakespeare scholar who is highly respected (quiet down there, you in the back, or I'll send you out in the hall) am watching a show from the 1970s that is full of corny jokes (literarily corny some of the time—they were often delivered in a corn field) and country bumpkin stereotypes.
But is the Shakespeare scholar not able to have other fields of interest? Can we not find amusement—nay, even pleasure—in things that smack less of Shakespeare than other things? Does not even Shakespeare Geek himself enjoy WWF wrestling? If you tickle us, do we not laugh? If you . . .
Sorry. I got carried away.
I grew up on Hee Haw, and the Ken Burns documentary on Country Music (which, even though others make fun of me for so doing, I rewatch once or twice a year) reminded me of the show. A few ILL requests later, and I had me some Hee Haw to watch.
And that's when I spotted the Shakespeare in it! In the episode listed above, the "Hee Haw Players" give us a bit of Shakespeare. Let's take a look . . .

In the Romeo and Juliet scene, we have the expected joke. But with a twist. Lulu Roman says "Whereforth art thou, Romeo," which makes Junior Samples' reply ("Any fool can see I'm right here at the bottom of this stupid ladder") not quite fit. Then again, since neither "wherefore" nor "whereforth" mean "where," any reply about location is equally nonsensical.
In the second scene, we have a line from Richard III . . . followed by Gordie Tapp, dressed as Julius Caesar of all people and smoking a big cigar, giving a tip on a horse race and trying to make Junior break.
All in all, I suppose there not much depth there. But I find it intriguing to have additional evidence of how pervasive Shakespeare is in modern Western culture.
Note: Shakespeare Geek says that calling it WWF is "a very old school thing to do." That's a compliment, I imagine.
Links: The Episode at IMDB. 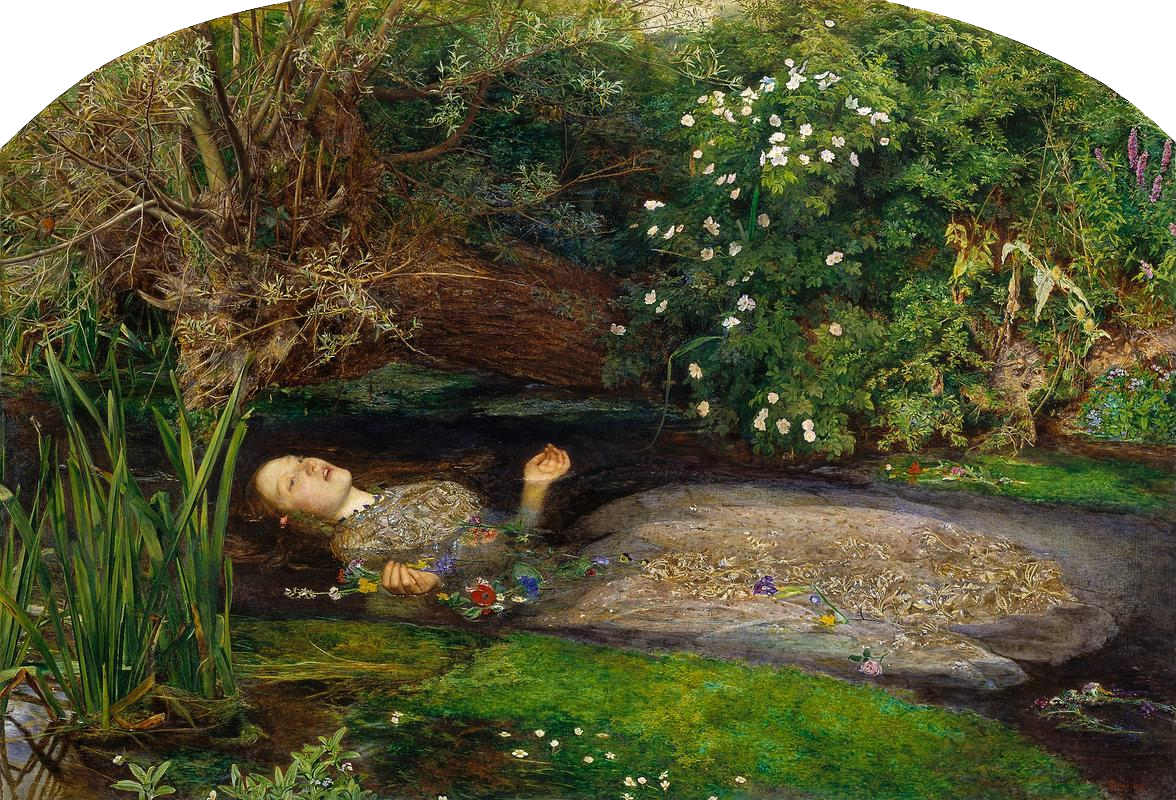 Millais, John Everett. Ophelia. 1851–1852.  Oil on canvas. Tate Britain [formerly known as the Tate Gallery {and, before that, known as the National Gallery of British Art}].  https://www.sartle.com/artwork/ophelia-john-everett-millais (and elsewhere).
Hamlet wears black and carries a skull.  Ophelia is surrounded by flowers.  Lady Macbeth looks like the kind of person you wouldn’t want to invite to dinner.
All that is right, right?  But how do you know?
Well, sure, you could read the plays carefully, noting every line and every nuance of every line.  Or you could let artists throughout art history do the work for you!
Let’s start with Ophelia, who has received a great deal of artistic attention over the centuries.  The top contender for “Most Recognized Portrait of Ophelia” is probably the one by John Everett Millais.
The painting visualizes a scene that is not actually put on stage in Shakespeare’s play.  It’s a visualization of Queen Gertrude’s “willow” speech reporting Ophelia’s death to King Gertrude and to Ophelia’s brother Laertes.  Here are a few key sections from that speech:

There is a willow grows askant the brook
That shows his hoary leaves in the glassy stream.
Therewith fantastic garlands did she make.
. . . . . .
[Then she] fell in the weeping brook.  Her clothes spread wide,
And mermaid-like awhile they bore her up,
Which time she chanted snatches of old lauds . . . .
. . . . . .
. . . But long it could not be
Till that her garments, heavy with their drink
Pull’d the poor wretch from her melodious lay
To muddy death. (IV.vii.165ff, passim)

Let’s take a moment to paraphrase Gertrude’s speech.  “You know where that willow over the brook is?  Well, Ophelia went there and made a bunch of daisy chains with all sorts of flowers (not just daisies).  Then she fell in, singing all sorts of hits from the ’80s all the time.  And it looked like it would be all right for a moment—you know how your swimming suit is full of bubbles when you first get in the pool?  But it didn’t take long for her clothes to fill with water and drag her down to the bottom.  And when they did, she died.”
This painting picks all those details up and gives them, in words from another Shakespeare play, “a local habitation and a name.”  It fixes the lyricism of Gertrude’s speech in a specific image we can all contemplate.  The willow is there—if we think of the brook as flowing from right to left, she’s about to float under it; if she’s heading downstream feet-first (the order in which the images are presented in the text), she’s just passed under it.  The garlands are there—notice one woven together as a laurel crown floating near Ophelia’s right foot.  Either it’s following her downstream or it’s proceeding her.  The singing might be there in that expression on Ophelia’s face—or it might not. There’s ambiguity in what her open mouth portrays.  But there’s less ambiguity in the garments that are also there.  They are clearly getting “heavy with their drink”—mostly around the waist at the moment the picture portrays, but we can imagine the currently-floating skirt of the dress filling with water and eventually bringing Ophelia fully under.
You may think I’m making too much of the ambiguity about which way the water’s flowing and whether Ophelia is singing and what I mean by the “eventually” of Ophelia’s drowning, but those are all important components of the painting.
In a recent Twitter poll, more people thought the brook is flowing to the left (i.e., Ophelia is floating headfirst down the stream) than the other options. And some respondents were pretty vehement about it! 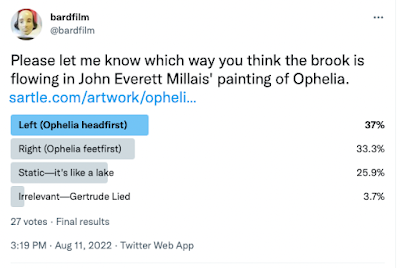 Why does it matter which way the brook is flowing?  Frankly, it doesn’t.  But that’s kind of the point.  When Laurence Olivier made a film of Hamlet in 1948, he provided images of Ophelia drowning while Gertrude’s speech plays in voiceover.  (As a side note, not all films of Hamlet show Ophelia at this point—Kenneth Branagh doesn’t—apart from a quick image of Ophelia already drowned; Franco Zeffirelli does—for a few seconds . . . from a great distance.)  Olivier deliberately appropriates Millais’ vision of Ophelia, but he makes some changes.  Olivier’s film is filmed in black and white, which clearly mutes the vibrant colors Millais uses.  And Ophelia’s feet are to the left in Olivier’s film (though I don’t know that that’s a significant change).  And she’s floating feetfirst down the stream:

That might not be a change from Millais’ painting, but it is a decision that an artist in film made based on the vision of an artist in paint.  And it matters!  It matters because Millais’ painting is a snapshot—the same way Gertrude’s speech is a snapshot.  Notice that (despite my paraphrase) Gertrude doesn’t say “She died.”  She says “But long it could not be . . .”  She’s holding Ophelia in an indeterminate position.  She’s still alive, and she won’t be alive long, and it won’t be long until she’s not alive . . . but she’s not actually declared dead in Gertrude’s speech.  Gertrude just says “long it could not be till . . . death.”

Millais is doing the same.  We don’t know which way the brook flows because it doesn’t matter in Millais.  He wants us to have the suspense of the alternatives.  Ophelia becomes a Schrödinger’s cat of sorts.  In Schrödinger’s thought experiment, the cat is simultaneously dead and alive.  It has to do with the uncertainty principle and quantum physics—and you can find someone better qualified to explain it to you.  But in terms of art, we have Ophelia simultaneously dead and alive in this painting.

In the same way, we don’t know whether Ophelia is singing.  She could be singing—or we could imaging her mouth being open to take her very last breath.

In the Olivier film, Ophelia floats past the camera (feetfirst, from right to left, in black and white).  Then the camera pans to catch up with her, and we just see some garlands floating downstream and under the water.  Olivier can’t stop the film—he has to go on to tell the rest of the story.  Millais has the . . . shall we call it a luxury?  Millais has the luxury to show us one slice of Ophelia’s life without reaching the conclusion—however inevitable that conclusion will be.
Links: The Painting at Tate Britain.


Click below to purchase a giclee print on canvas reproduction of the painting
from amazon.com
(and to support Bardfilm as you do so).