For ease and speed, I'm putting up a FAQ style list based on last year's.

A: Julius Caesar and As You Like It. Didn't you look at the first part of this post?

A: Ah, there's something you should plan right now. The last show will be on July 31. Here's a handy calendar for your scheduling convenience.

Q: Man! That's more than a month of Shakespeare, but I'm sure it will go by quickly! I'll get my tickets right away! Now, they just just Shakespeare, right?

A: Actually, no.  They're also doing a musical called Georama this year. For the past few years, they've done a third show, but you don't hear much about those shows here because of Bardfilm's keen interest in the Shakespeare side of things.

A: Although that might be reason enough, there is a constant stream of other Shakespeare-related material happening in conjunction with the GRSF. Indeed, I was astonished at how much activity there was! There are narrated set changes, camps for young actors and designers, an apprentice program (they're doing Coriolanus this year), conversations with the actors and directors, et cetera, et cetera, et cetera.

Q: You've convinced me. I'm off to plan my visit right now.

A: I'm so glad! You won't regret it. If I see you there, don't be overawed. Just step right up, ask for an autograph, and we can chat some about Shakespeare—or even other topics.

Q: Oh! One more thing. I know it's going to be great, but are there any trailers of the plays that I can use to convince my friends, co-workers, spouse, neighbors, and others to come see the shows with me?

A: That's a great thought! Thanks for asking. Yes, I'll embed a trailer for each Shakespeare play right here / right now!


There's so much more that could be said about the GRSF—but why don't I get some other work done and you find a way to get there to see for yourself?
Links:  The Great River Shakespeare Festival.
Copyright 2008-2039 by kj at 11:37 AM No comments:

How to Bite your Thumb 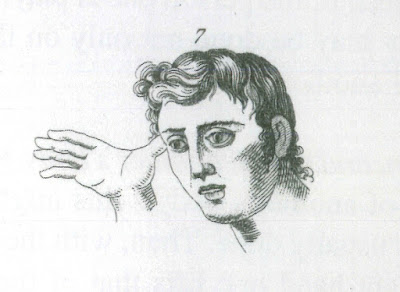 Jorio, Andre de. La Mimica degli Antichi investigata nel Gestire Napoletana [Gesture in Naples and Gesture in Classical Antiquity: A Translation of La Mimica degli Antichi investigata nel Gestire Napoletana: Gestural Expressions of the Ancients in the Light of Neapolitan Gesturing. Trans. Adam Kendon. Bloomington: Indiana University Press, 2000.
Shakespeare enthusiasts often explore utterly fascinating (yet admittedly trivial) details. As a case in point, I offer a question ShakespeareGeek recently raised, to wit (Shakespeare enthusiasts are often guilty of using the phrase “to wit” as well) “Do we know how Shakespeare and his audience would have imagined the thumb biting at the beginning of Romeo and Juliet. You may remember the scene in question: Quarrelling breaks out among the servants of the two noble households (both, it is said, alike in dignity). Here’s the exchange in question:


SAMPSON
Nay, as they dare. I will bite my thumb at them; which is a disgrace to them, if they bear it.

SAMPSON
I do bite my thumb, sir.

SAMPSON [Aside to GREGORY]
Is the law of our side, if I say ay?

I didn’t have a quick and easy answer for him. I just had a sense, from seeing different stagings and different films, of what I imagined it to be. After asking some Shakespeare enthusiasts on Twitter (and receiving some help from @mirandafay), I pursued three different avenues of research: The Arden Editions of the play, a scholarly work on Italian gesture, and the Internet.

Both the second and third series of the Arden gloss the line right away, and each points toward Cotgrave. The second series (edited by Brian Gibbons) gives us this basic definition (see the note to line 40 in the image below:

The third series enlarges on this and provides a slightly-different version of the quote from Cotgrave: 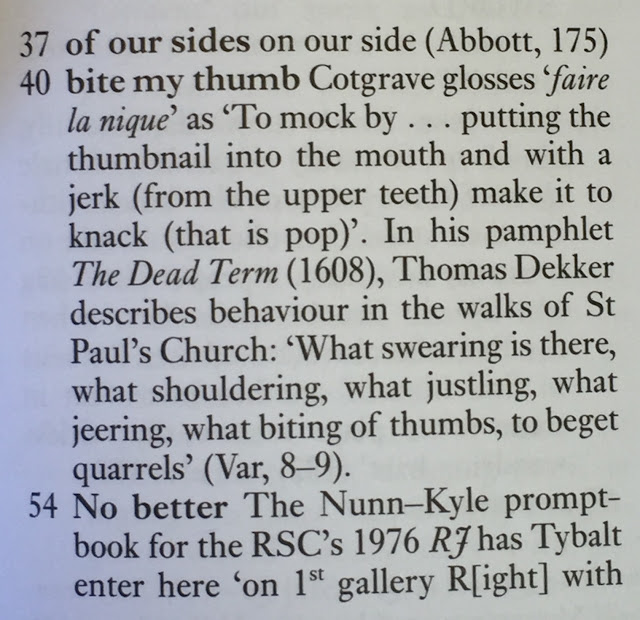 The Dekker quote in the third series’ gloss is very helpful, giving us a roughly-contemporaneous London use of the biting of thumbs—designed, it seems, to beget quarrels.

[Note: Both editions do some modernization as they quote. At the end of this post, I provide images from Cotgrave for comparison's sake.]

The scholarly work on gesture in Italy (cited at the beginning of this post) gives us a bit more about the meaning of the gesture: 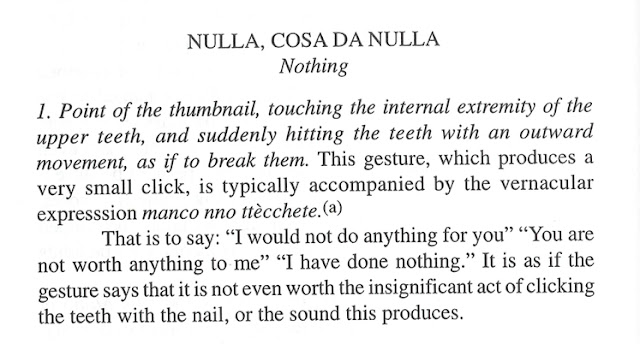 Gestures, especially seen from outside the culture, can be quite ambiguous, but this book connects the gesture to the utterance manco nno ttècchete—"You are nothing to me."

The Internet was not altogether helpful in this instance. A fair number of YouTube videos have been put together to show what contemporary (contemporary to us, not contemporary to Shakespeare) Italian gestures look like and mean, but I didn’t track down much on English versions of Italian gestures in the late 1590s. But the Internet did, at least, point me toward Superman III as one non-Shakespearean place where thumb biting is potrayed. An Italian merchant becomes angry at Superman for undermining his souvenir sales:


Having come all this way, you're probably anxious to see how the major film versions of Romeo and Juliet have portrayed the thumb biting. Very well, then: Let's start with Cukor. In his film, the thumb biting, which follows most nearly the descriptions outlined here, is merely part of escalating hostilities:


In Zeffirelli, the thumb is not actually bitten—but it is prominent in instigating a quarrel.

Baz Luhrmann goes (as usual) fairly far over the top. I include some of the other excesses that surround his version of the thumb biting.


There you have it—all that from a single line in Shakespeare.
Bonus! A few Italian gestures, including number seven—Stupido. 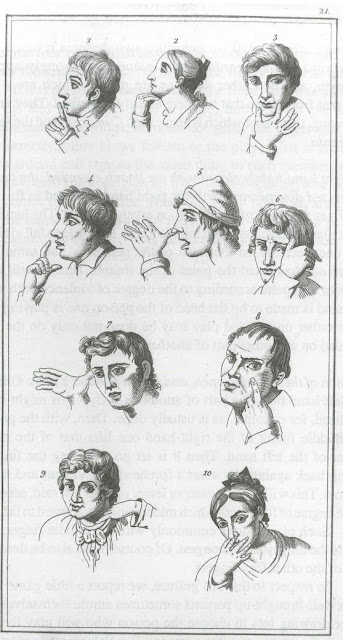 Extra bonus!  A few Italian hand gestures, including number one—Mano in fica (the fig of Italy). [Note: There are plenty of figs in Shakespeare—notably Pistol's "The fig of Spain"—but that's a gesture for another day.] 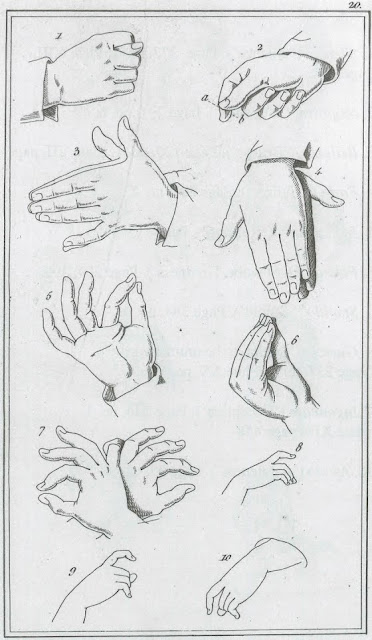 Second, the entry for "Faire la Nique." Notice how "to bid a fig for" is offered as a possible English equivalent:

Click below to purchase the films and the books from amazon.com
(and to support Bardfilm as you do so).

Cotgrave, Randle.  A Dictionarie of the French and English Tongues [Compiled by Randle Cotgrave, Reproduced from the first edition, London, 1611 with introduction by William S. Woods.]  Columbia:  University of South Carolina Press, 1950.