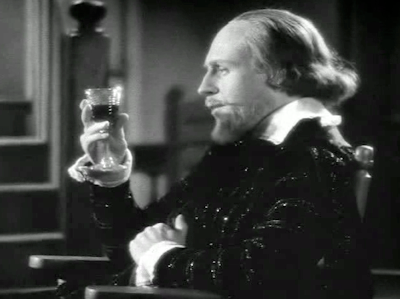 “Master Will Shakespeare.” Dir. Jacques Tourneur. Perf. Carey Wilson and Anthony Kemble-Cooper. 1936. Romeo and Juliet. Dir. George Cukor. Perf. Norma Shearer, Leslie howard, Basil Rathbone, and Andy Devine. 1936. DVD. Warner Video, 2007.
MGM had another ax to grind in its biographical short on the life of William Shakespeare. This time, it's not based on myths—instead, it's based on marketing.

In the clip below, we learn what Shakespeare's favorite play was: Romeo and Juliet. We even get to hear him deliver a speech from MGM's most recent Shakespeare production!


Eyes, look your last!
Arms, take your last embrace! And, lips, O you
The doors of breath, seal with a righteous kiss
A dateless bargain to engrossing death!
Come, bitter conduct, come, unsavoury guide!
Thou desperate pilot, now at once run on
The dashing rocks thy sea-sick weary bark!
Here's to my love! (Romeo and Juliet, V.iii.112-19)

The clip concludes with a bit more Elizabethan theatre baiting—they were so unrealistic! [I assume they mean that Elizabethan stage practices look unrealistic to 1930s American film culture. And I can only imagine that the Elizabethans would be saying the same about the 1930s in America!]

Links: The film at IMDB. 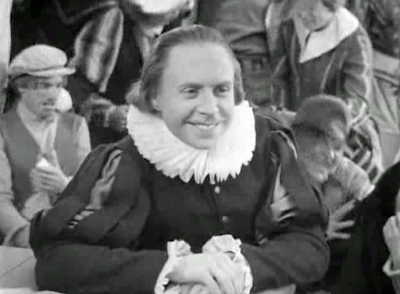 “Master Will Shakespeare.” Dir. Jacques Tourneur. Perf. Carey Wilson and Anthony Kemble-Cooper. 1936. Romeo and Juliet. Dir. George Cukor. Perf. Norma Shearer, Leslie howard, Basil Rathbone, and Andy Devine. 1936. DVD. Warner Video, 2007.
Schoenbaum, S. Shakespeare’s Lives. New Edition. Oxford: Oxford University Press, 1993.
Samuel Schoenbaum's Shakespeare’s Lives is one of the most extraordinary books of the last four hundred years. This excruciatingly-, painstakingly-, meticulously-researched book reads like the research was no trouble at all—or, if it were, the pain were counted pleasure for our sake. It is scholarly, eloquent, hilarious, and fascinating—but it is scholarly above all its other marvelous attributes.

But, in attempting to clarify or to debunk Shakespearean myths, Schoenbaum has an uphill road. Popular culture perpetuates myths.

I told you all that to tell you this. The DVD of the George Cukor Romeo and Juliet has a biographical film as a special feature. The interest in it lies in these main points:

This tired old myth states that Shakespeare started his theatrical reputation by holding horses at the door of the theatres around London. In This production, this myth is given a new spin by making it the Blackfriars Theatre. Unfortunately, the Blackfriars closed from 1585 until at least 1599 and didn't host Shakespeare's company until c. 1608. If he held horses there, it must have been right at the beginning of the lost years.

The film traces the rest of Shakespeare's career on typical (if not verifiable) lines. He began by rewriting others' scenes, then others' plays, and then he was able to write his own plays.

The Elizabethan Theatre was Primitive by Modern Standards

I suppose MGM had a vested interest in arguing that its films were top-notch technical wonders—but do they really have to tear the Elizabethan Theatre down to build themselves up?

Whenever this Shakespeare is pleased with himself, he finds his face contorted into an uncontrollable smarmy expression (see above). Again, there is little evidence to support a smarmy bard (though "Smarmy Bard" wouldn't be a bad name for an alternative band).

Read Samuel Schoenbaum, and then watch this clip with a salt shaker handy:


And the brief biographical film does take the time to show Shakespeare signing 1 Henry VI, one of his earliest plays (even though it's very unlikely that he ever did any such thing, at least they had him sign a play from the right era): 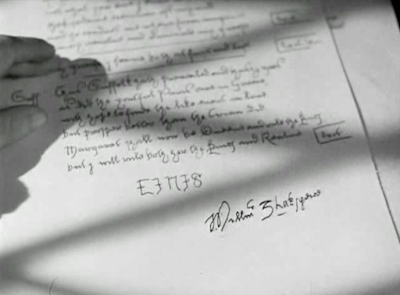 And I'm sure "Little Stagestruck Sally" and "Footlight-Fascinated John" were happy to get a shout out in this production!


Click below to purchase the book and / or the film from amazon.com
(and to support Bardfilm as you do so).

We've been to the Festival for many years running, and every show has topped the last one. This year promises to be no exception!
Head to the GRSF website to get your tickets! Now!Links: The Great River Shakespeare Festival.
Copyright 2008-2039 by kj at 1:03 PM No comments: