In this clip, each character get a quick rhymed couplet to indicate his desire or fitness for Hollywood performances:

For those of you who would like to have the lyrics as you watch, here they are!


Falstaff:
As Falstaff, I made them laugh for centuries. Ho, ho!
But with my art in Guy Kibbee parts—Forsooth, I'll steal the show.

Richard III:
As Richard the Third, I must be heard. I'm Hollywood-bound, of course.
My talent leans to those Wild West scenes; my kingdom for a horse.

Romeo:
Romeo in Hollywood! What sublimity!
Does anyone know if Miss Garbo has a balcony?

Caesar:
Who art thou, Durante? Thou knave with monsterous beezer.
Thy flickering is ended—Hachachacha!—make way for Julius Caesar.

Bardfilm is ineluctably indebted to a reader called "mepalmer" for providing explanations to some unintelligible (to me, though not to mepalmer) lyrics. The comment (see below) clarified both what Falstaff sings and what Caesar sings. Before I read the comment, I thought Falstaff was singing "But with my art in 'Guy, give me' part," but I couldn't make reason or rhyme out of that at all. "With my art in comedy parts" would have made a lot of sense, but he's clearly (or unclearly?) not singing that.

Thank you, once again, mepalmer!
Links: The Film at IMDB.

So Many Dancing Hamlets!

Yet it has its charm. The plot centers on an overworked Assistant Production Manager who, according to the memo in the image above, is asked by a production manager to "read all Shakespeare's plays tonight and let me know tomorrow morning what they are all about."

After an attempt, the Assistant Production Manager falls asleep and has a dream (does this sound a bit too much like Piers Plowman?)—Shakespeare's characters walk out of the books he has scattered over his desk and declare their happiness at being bound for Hollywood.

The following is the Hamlet segment. When Hamlet realizes that the silver screen desires multitudes of Hamlets, he snaps his fingers and a dozen or so female Hamlets (is this a place to study the long history of women appearing in the role of Hamlet?) appear behind him (all in recognizable Hamlet garb) for a big dance number: 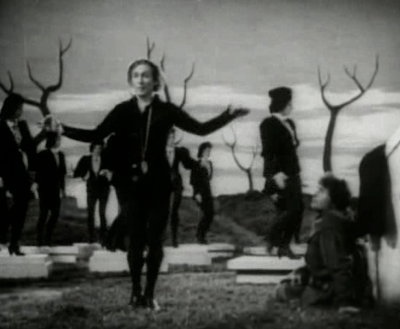 It really is some of the silliest stuff produced.

And it was produced in a period noted for its silliness.

There's some interest, I suppose, in the way Yorick's skull has become part and parcel of the costume of Hamlet—if you want to suggest Hamlet, you need a black outfit, a dagger (optional, but helpful), and a skull.

Perhaps it's a bit reductive, but it does make for some amusing stage business.

In any case, this short film, however ridiculous it might be, is not quite as silly as the biographical shorts made in the period—about which, more anon!
Links: The Film at IMDB. 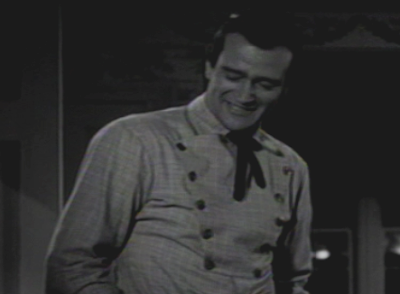