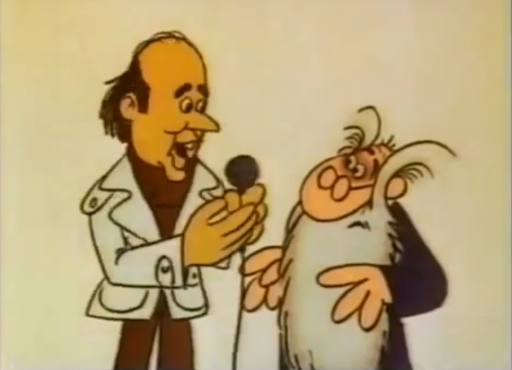 The 2000 Year Old Man [sic]. By Carl Reiner and Mel Brooks. Dir. Leo Salkin. Dir. of Animation Dale Case. Acre Enterprises, Inc., 1974.When we had to shut everything down, I started walking. When I heard that Carl Reiner died (June 29, 2020), I started listening to his albums while walking. His work with Mel Brooks was and is astonishing. It goes well beyond the 2,000-year-old man sketches, but those are the best-loved and most-remembered ones.
A fair number of different versions of the sketch exist—some starting at the same point of the first one, some continuing the narrative from there. All of them involve a reporter (Reiner) interviewing the 2,000-year-old man (Brooks).
I was trying to figure out how best to deliver the part of the sketch that involves Shakespeare when I stumbled upon an animated version! It occasionally spoils the timing of the original, but it's probably better for viewing in a venue like this.
Here, then, is the Shakespeare section of The 2,000-Year-Old Man:
As a side note, the 2,000-year-old man doesn't mean "First Folio."  He means "manuscripts." The First Folio was the first time most of Shakespeare's plays were published together in one volume—in 1623, seven years after Shakespeare's death. A small slip for a 2,000-year-old man—I think we can give him the benefit of the doubt.
The full sketch is here.
Copyright 2008-2039 by kj at 7:00 AM 1 comment: