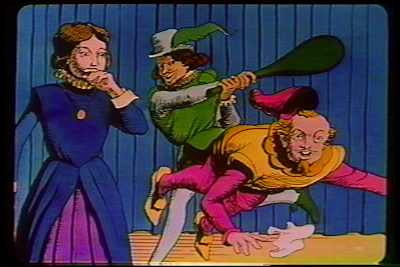 Shakespeare: A Day at the Globe. By William Furstenberg. Prod. William Furstenberg. Videocassette. Guidance Associates, 1990.Sidney, Sir Philip. The Defense of Poesy. Sir Philip Sidney. Ed. Katherine Duncan-Jones. Oxford: Oxford University Press, 1994. 101-42. While cleaning up the office yesterday, I put in a videocassette I had checked out at random from our school library to see if it would be of any use. It appears to be dated 1990 (though it's hard to make out the Roman numerals on the closing screen); it also appears to be a videocassette of a film strip / LP combo available at some point for classroom use.

It turned out to be mildly interesting and not at all useful.

Except that it had the following slides accompanying excerpts from Sir Philip Sidney's Defense of Poesy. In the quotations, Sidney (who died in 1586—unless you follow the conspiracy theorists who arugue that he just went into hiding, only to re-emerge in the character of Christopher Marlowe (who went into hiding in 1593, only to re-emerge in the character of William Shakespeare)—and who was unable to see any one of Shakespeare's plays—unless, of course, he wrote them all himself) is objecting to the theatre of his day and its violation of the Unities:
I wonder what Sidney would have thought about (1) any one of Shakespeare's plays and (2) any film version of any one of Shakespeare's plays. Would he have been horrified, or would he have modified his views after seeing what a director like Branagh could do with a script?
Copyright 2008-2039 by kj at 7:05 AM