A Week of Silents at Bardfilm 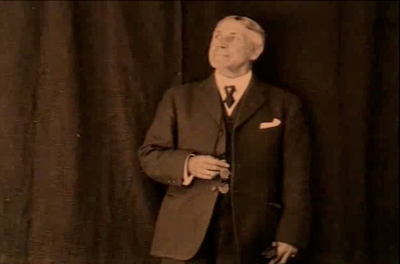 Richard III. Dir. James Keane. Perf. Frederick Warde, Robert Gomp, Albert Gardner, and Violet Stuart. 1912. DVD. Kino, 2001.
Gnarls Barkley. “Feng Shui.” St. Elsewhere. Warner Music, 2006.
I've been collecting rare clips of silent versions of Shakespeare plays for a while now, and I've gathered enough to have a week of Silents. [At some point, I will also have a week of silence at Bardfilm, but that's for the future.]

I've posted on Silent Shakespeare before (cf. posts on Hamlet, The Tempest, and King Lear). This week, we'll look at shorter, rarer clips, most of which are found on the DVD listed above and below: the Kino release of the 1912 Richard III.

Although there's always dispute about these matters, it seems that the earliest extant American feature film is this version of Richard III. Staring Frederick Warde, the film runs about an hour. One interesting thing about the the film is the Frederick Warde (in the photograph above) used to tour with the film, reciting monologues and offering commentary on the film as it ran. With Warde around, it wasn't exactly silent Silent Shakespeare; unfortunately, all we have left is the silent film. It would be marvelous to have a recording of Warde to go along with it, but the survival of the film is miracle enough.

Here's a montage from the film—with a nifty soundtrack by Gnarls Barkely:


Click below to purchase the film
and /or the album containing the song on the soundtrack
from amazon.com
(and to support Bardfilm as you do so).