Two Weeks of Silents End with a Mysterious Post 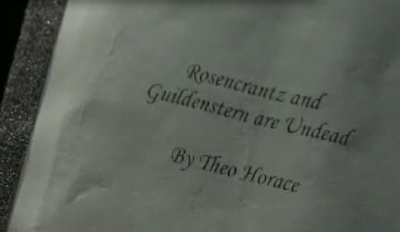 Rosencrantz & Guildenstern are Undead. Dir. Jordan Galland. Perf. Jake Hoffman and Devon Aoki. 2008. C Plus Pictures, 2008. We've had two weeks of silent films, nearly exhausting my reservoir. Before we have "Shakespeare and Opera" week or "Shakespeare and Star Trek" week (both distinct possibilities), we'll have something of a "Random Shakespeare" week.
It has been a while since I've thought of the film entitled Rosencrantz and Guildenstern are Undead (for which, q.v.). The vampire-related, Holy-Grail-quest-themed, Hamlet-production film doesn't yet have a release date, but subtle promotions for it continue. Here are three videos (from a site called Shakespiracy) that attempt to create a backstory—in this case, thousands of years of backstory!—for the film. They are bizarre—but they're also interesting. And I find them funny.