Today: "Blow, Winds, and Crack Your Cheeks"—Slings and Arrows Style 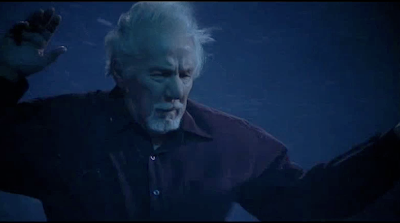 “That Way Madness Lies.” By Susan Coyne. Dir. Peter Wellington. Perf. Martha Burns, Paul Gross, Don McKellar, Mark McKinney, Oliver Dennis, Susan Coyne, Stephen Ouimette, Catherine Fitch, and William Hutt. Slings and Arrows. Season 3, episode 2. Movie Central: Canada. 7 August 2006. DVD. Acorn Media, 2006-2007.
Briefly, one version of the "Blow, winds, and crack your cheeks" speech from King Lear appears below.  This time, Lear is accompanied by The Storm-a-Tron 3000 (or something)—the latest in storm technology for dramatic productions. More on this later, but the words and the actors should be able to convey the sense of the storm more than all the special effects in the world. Take a look:

[Note: One obscenity has been silenced—but, because you can still tell it was there, I thought you should know about it in advance.]