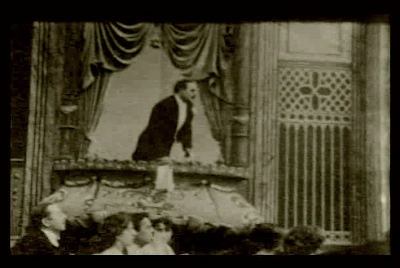 Desdemona [a.k.a. Up with the Curtain (For Åabent Tæppe)]. Dir. August Blom. Perf. Valdemar Psilander, Thyra Reimann, Nicolai Brechline, Henry Knudsen, Svend Bille, and Julie Henriksen. 1911. Nordisk, 1911.
Kenneth S. Rothwell suggests that there are seven kinds of Shakespearean Derivatives. This very early silent film falls into his classification of "Mirror movie." In this kind, the characters in the film put on a Shakespeare play, and the plots of the play-within-the-film and the film interact.


In this Danish film of 1911, a jealous actor playing Othello strangles his actor-wife on stage.