Stand up! Stand up! 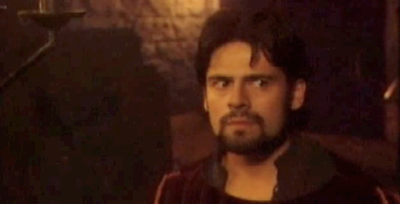 King Lear. Dir. Brian Blessed. Perf. Brian Blessed, Hildegard Neil, Jason Riddington, and Phillippa Peak. 1999. DVD. Storm Bird, 2006.
At the request of a reader / viewer, I'm posting a portion of Jason Riddington's Edmund from the Brian Blessed Lear. I'm delighted to do so, because I always hear the speech as a rousing, Saint-Crispin's-Day-esque speech that rallies its audience to a fever pitch—even though it's in favor of the bad guys. Most actors seem skittish with the speech, most so with the "Now, gods, stand up for bastards" conclusion.

Riddington doesn't mind giving the speech some of its full grandeur:


I'm not entirely satisfied with this version—I'd love to have the soundtrack from Kenneth Branagh's Henry V playing in the background, swelling and rolling and moving us to cheer for Edmund during this speech.
Links: The Film at IMDB.