My Love is [as] a Fever: Over the Rhine Meets Sonnet 147 Meets Silent Midsummer Night's Dream 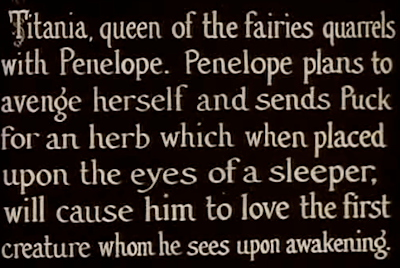 A Midsummer Night's Dream. Dir. J. Stuart Blackton and Charles Kent. Perf. William V. Ranous, Maurice Costello, Walter Ackerman, Julia Swayne Gordon, Rose Tapley, Gladys Hulette, Charles Chapman, Helene Costello, and Dolores Costello. Vitagraph Company of America. 1909. Silent Shakespeare. DVD. Image Entertainment, 2000.
Over the Rhine. “My Love is a Fever.” Eve. Capitol, 1994.
The special effect technology in this 1909 Midsummer Night's Dream is remarkably similar to that used by my brother and me (primarily my brother) in the films we made with his 8mm movie camera: film a bit, turn off the camera, place (or remove) an object, and resume filming! But there's also an intriguing attempt at visualizing Puck's putting "a girdle round about the earth in forty minutes" (II.i.175-67).

The film's decisions are also intriguing. Instead of Oberon, we have a fellow fairy (apparently named "Penelope," of all things!) avenging herself on Titania. I wonder if that's a more palatable arrangement for the 1909 audience than the troubled marriage of Oberon and Titania—especially with the "Wake when some vile thing is near" (II.ii.33) approach to marriage counseling Oberon takes.


For the soundtrack, I debated some considerable time between "Dear Prudence" from the soundtrack of Across the Universe and "My Love is a Fever" from Eve, the 1994 album from Over the Rhine. As you can hear, I decided on the latter (though I may decide to post the former later). I thought the themes of the song, as well as its rough paraphrase of the first line of Sonnet 147, were entirely appropriate. Also, it's great to have Bottom the Weaver mugging around to the sloppy, gritty blues guitar in the number.
[N.B.: The version of the song is not actually the one from Eve; it's from a rare, limited-release CD entitled Live from Nowhere, Volume 1—Eve is much easier to find, and it's a great album, too.]