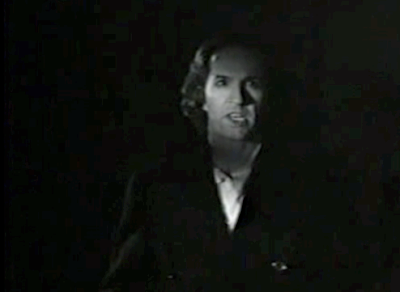 A Midwinter’s Tale [a.k.a. In the Bleak Midwinter]. Dir. Kenneth Branagh. Perf. Richard Briers, Hetta Charnley, Joan Collins, Nicholas Farrell, Mark Hadfield, Gerard Horan, Celia Imrie, Michael Maloney, Jennifer Saunders, Julia Sawalha, and John Sessions. 1995. Videocassette. Turner, 1999.
We return to Branagh’s A Midwinter’s Tale (for which q.v. and q.v.) to see how they begin the production. The scene below takes place near the end of the film. By this time, the odd group of actors we saw in the audition have struggled with the play and with each other (and some other things have happened, but you don't want any spoilers). The designer has made some cardboard audience members—so that the house won't look bare on opening night. And what an opening it is! Take a look: