King Richard of the Street 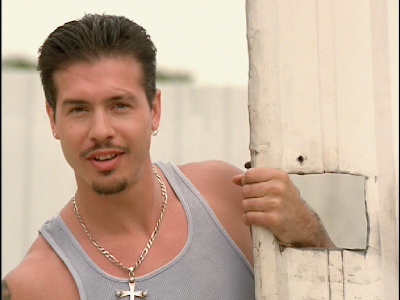 The Street King [a.k.a. King Rikki]. Dir. James Gavin Bedford. Perf. Jon Seda and Mario López. 2002. DVD. Universal Studios, 2003.
Although its production values are somewhere in the Saturday-Afternoon-Modern-Detective-Movie-on-KPLR-TV Range, The Street King has quite a lot of interest. It's a resetting of Richard III among California gangs. And it works.

Jon Seda is the reason it works. He plays Rikki, a young thug—the only one without a criminal record—who is trying to make it to the big time. Seda plays Rikki as incredibly open and honest and likable—even though he's about to do horrible things. It's not a bad way to understand Richard: he, too, is somehow immensely personable and magnetic.  I mean, take a look at the image above.  He must be a really nice guy, right?

I've streamlined the clip below to concentrate on that openness of the Jon Seda Rikki. As a result, the plot isn't entirely clear. But I don't think it needs to be. What I'd like you to notice is the way he's explaining everything to us. He's completely at ease with us; he's completely friendly with us—up to a point. At that point, he honestly tells us that he doesn't know us that well, so he needs to keep one or two secrets from us.