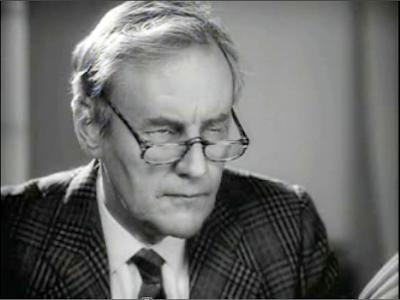 A Midwinter’s Tale [a.k.a. In the Bleak Midwinter]. Dir. Kenneth Branagh. Perf. Richard Briers, Hetta Charnley, Joan Collins, Nicholas Farrell, Mark Hadfield, Gerard Horan, Celia Imrie, Michael Maloney, Jennifer Saunders, Julia Sawalha, and John Sessions. 1995. Videocassette. Turner, 1999.
I've mentioned this brilliant, brilliant film before, but I noticed (as I was doing a periodic check to see if the film had been released on DVD yet—it hasn't, more's the pity) that a trailer was available. I'm only able to show it here in an Adobe Flash, amazon.com-related manner (see below), but it's clearly worth it.

The film involves a down-on-his-luck actor (not played by Branagh, but played by an actor clearly trying to play the part as close to the way Branagh would play it as possible) who wants to put on a production of Hamlet to invigorate his career. At Christmas. In a village called Hope. With a bunch of actors even further down on their luck than he is. It's great.


I'll also post, as a bonus, the audition clip I posted earlier. Perhaps it's time to start a grassroots campaign to get this film out to the viewing, paying public on DVD!  Are you listening, Turner?


The Trailer for the Film:


The clip from the auditions scene: