The Granddaddy of Modern Lear Derivatives 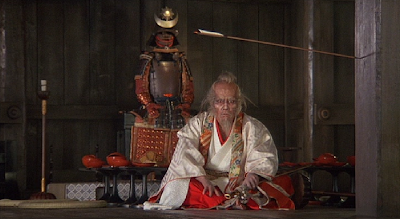 Ran. Dir. Akira Kurosawa. Perf. Tatsuya Nakadai and Akira Terao. 1985. DVD. Criterion, 1985.
Prospero's Books is to The Tempest as Ran is to King Lear. They both are such rich, magnificent, bizarre, moving, and off-putting films as to make future filmmakers think twice about approaching the same subject matter.

Ran is Kurosawa's filmmaking apogee. And the clip below is the apex of the apogee. (It's really the culmination of the pinnacle of the summit of the zenith of the apex of the apaogee, but let's not quibble).  In this clip, the Lear analogue has been attacked by his children and has lost the battle. Alone in the burning castle, he loses his sanity. Unable to find a sword with which to commit Seppuku, Ichimonji (Lear) simply walks out. The two victorious armies are so awed by his madness or his suffering or the remnants of his authority that they simply divide and let him pass.

The scene is one of the most famous in this most famous (it is one of only three Shakespeare-related films mentioned in 1001 Movies You Must See Before You Die) of Lear derivatives. The fire burning down the castle is also destroying the hugely-expensive set—Kurosawa and his actors get one take to do this perfectly.  And they do.

Links: The Wikipedia entry on the film.