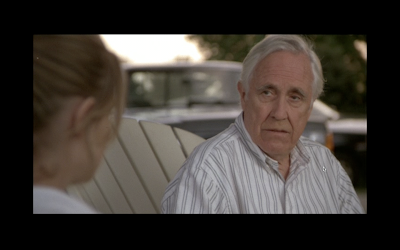 A Thousand Acres. Dir. Jocelyn Moorhouse. Perf. Jessica Lange, Jason Robards, and Michelle Pfeiffer. 1997. DVD. Walt Disney Video, 1998.
Based on the novel by the same name, itself a Shakespearean Derivative, A Thousand Acres is, I suspect, the most renowned film in the very specific genre of "Modern Lear-Based Shakespearean Derivatives."  And so it should be.  The novel was very interesting, and the film did its work of turning the novel into something similar while maintaining its own distinctiveness.

Both the novel and the film turn the Lear analogue ("Larry") into an incestuous father whose horrific abuse of two of his daughters gives motivation to their horrific treatment of him.  Some readers and viewers may think this goes too far in justifying the actions of the Goneril and Regan analogues ("Ginny" and "Rose," respectively), and I agree with them—if we expect the book and the film to give us what Lear gives us.

A vile Lear makes it much, much harder to empathize—or even to sympathize—with the tragedy (which may then be less tragic).  But A Thousand Acres invites us to consider one possibility for the story as told from the daughters' point of view.

It's not King Lear itself; but it's not meant to be.  At what it tries to do, it succeeds.

And that last sentence, I suppose, is hardly the kind of quote you'd find on the back of a DVD box, but it will have to do.
Links: Wikipedia Article for the Book.