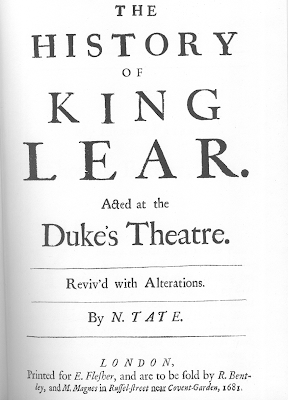 The | History | of | King | Lear. | Acted at the | Duke's Theatre. | Reviv'd with Alterations. | By N. Tate. | London, | Printed for E. Flesher, and are to be sold by R. Bent- | ley, and M. Magnes in Fussel-street near Covent-Garden, 1681.
From 1681-1838, the version of King Lear most people would have seen was Nahum Tate’s. The title page of the printed version of Tate’s production of the play leaves it nicely ambiguous whether the entire thing is by Tate or if the “by” refers only to the alterations. Tate’s alterations are so extensive as to make Shakespeare’s authorship (or collaboration?) minimal. The end demonstrates this well. In Nahum Tate’s version, everyone lives happily ever after. Cordelia even marries Edgar at the end of Tate’s play!

Alistair Cooke mentions a bit of the stage history in his introduction to Welles’ Lear (for which q.v.). When he mentions the eighteenth century’s dismissal of the play as “disorderly—barbaric,” I imagine that he’s thinking of the reasons Tate had for altering the play. To my way of thinking, Tate’s version seems more disorderly and barbaric than Shakespeare’s.

Tate was also the poet laureate of England and wrote a poetic translation of the Psalms, the most famous of which ended up in the hymn “As Pants the Hart for Cooling Streams” set to a tune by Hugh Wilson. [Note: Adjust your volume before clicking on that link—a MIDI file accompanies it, and it can be rather loud and unexpected if you don’t turn it down and / or expect it.]

The hymn is an adaptation of Psalm 42. It’s a hopeful hymn—and rightly so. But I wonder if a little time with Ecclesiastes—particularly Ecclesiastes 7:3-4—might have persuaded Tate to stick with Shakespeare’s ending: