WDWT: What Did Welles Think? 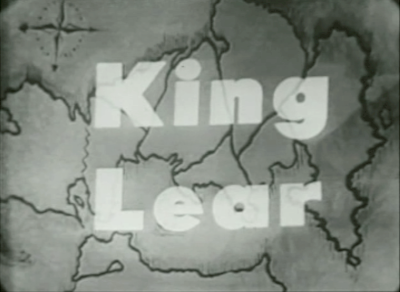 King Lear. Dir. Peter Brook. Perf. Orson Welles, Natasha Parry, Margaret Phillips, Beatrice Straight, and Alan Badel. 1953. DVD. Passport, 2006.
In the few minutes I had to spare before Faculty Meeting, I started Orson Welles' King Lear, a 1953 contribution to the television show Omnibus. I didn't have time to get too far into it—all I got to see was the opening commercials—but they were fascinating! I really wonder what Welles thought at that point in his career by being sponsored so heavily by Greyhound Bus Lines, of all people.

Perhaps he thought that Poor Tom (a.k.a. Edgar) prophesied about them in this speech from III.vi:


Tom will throw his head at them. Avaunt, you curs!
Be thy mouth or black or white,
Tooth that poisons if it bite;
Mastiff, Greyhound™, mongrel grim,
Hound or spaniel, brach or lym,
Or bobtail tike or trundle-tail,
Tom will make them weep and wail:
For, with throwing thus my head,
Dogs leap the hatch, and all are fled.
Do de, de, de. Sessa! Come, march to wakes and
fairs and market-towns. Poor Tom, thy horn is dry.

Whether he did or not, the introduction is interesting, and I thought we could all take a look at it. And we can all try to imagine Orson Welles as the driver of a Greyhound Bus as we do so.


Links: The Film at IMDB.  Note:  IMDB lists Andrew McCullough as the director, but the introduction mentions Peter Brook. I'll need to investigate this further, but I don't want to mislead anyone in the meantime.