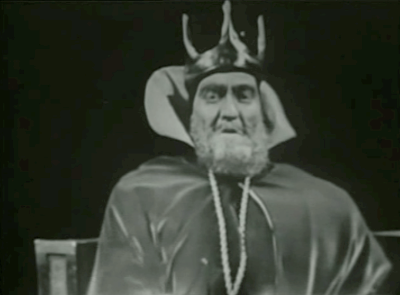 King Lear. Dir. Peter Brook. Perf. Orson Welles, Natasha Parry, Margaret Phillips, Beatrice Straight, and Alan Badel. 1953. DVD. Passport, 2006.
I felt a certain obligation to provide part of Welles' King Lear after giving you the short introduction, the Greyhound commercial, and the long introduction. It is a pretty straightforward production. The resonant voice of Welles is the most striking feature of it. Oh, and the hat. Welles and his hats. In his 1948 Macbeth, he looks like The Klingon Statue of Liberty. Five years later, not much hat progress has been made.  Now it seems to be a combination of Béla Lugosi, Saint Nick, and a Standard Grounded Outlet Plug.

Links: The Film at IMDB. Note: IMDB lists Andrew McCullough as the director, but the introduction mentions Peter Brook. I'll need to investigate this further, but I don't want to mislead anyone in the meantime.